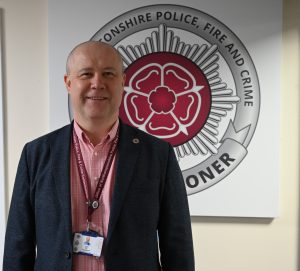 Stephen said that the report recognises the role played by Commissioners – ensuing that the voice of the public is heard and reflected, holding the Chief Constable and Chief Fire officer to account, and commissioning important services such as those for victims.

And he welcomed the announcement of a consultation into the proposal to bring all fire services under the governance of an elected Commissioner as a recognition of the work that has taken place in Northamptonshire, which is one of just six areas of the country where fire and police are under joint governance.

“Our experience in Northamptonshire, where both police and fire services are strengthening and measurably improving, has shown very clearly the benefits that can result from shared governance.

“We are seeing the benefits of developing new ways of working between the two emergency services – both in the teams that support the frontline and operationally in the response to incidents.  And that means real improvements in keeping the public safe, which is the most important factor,” Stephen Mold said.

“In taking on the governance of Northamptonshire Fire and Rescue Service, I have been able to work with the Chief Fire Officer and give him the tools to make the changes that have delivered improved response times, greater availability of fire appliances and the investment in more firefighters and modern equipment.

“Police and Fire in Northamptonshire will be sharing more buildings, where that supports the provision of the best possible service to the public. This means money is focused on providing services and not on maintaining an out-dated estate.  We have also created joint teams in areas providing Finance, HR and IT, ensuring that both services benefit from the same strong, effective support.”

Stephen said that governance by an elected Commissioner gives both police and fire services a voice that is heard by the Government.

“Both police and fire services in Northamptonshire are working to improve in a challenging environment.  Under the same governance, they benefit jointly from the changes when can make those improvements faster. And where we need government support – financially or otherwise – to make those changes, I am able to make those issues known.”

“I know it makes sense to the public, who expect police and fire to work seamlessly and want us to ensure that their money is used wisely and as effectively as possible.”

In Northamptonshire, the two emergency services are already working together by: