Chief Constable Nick Adderley said: “In 2018, Her Majesty’s Inspectorate of Constabulary and Fire & Rescue Services (HMICFRS) identified significant areas of improvement were required in order to better protect the public of Northamptonshire.

“On appointment as Chief Constable, I embarked upon a radical and transformative approach to the way policing services are delivered across the county, one which puts the community and victims of crime at the heart of all that we do.

“I am delighted that HMICFRS has recognised the improvements we have made and for their endorsement of the changes applied in order to better investigate crime, protect vulnerable people and better understand our demand.

“None of this would be possible without the work, tenacity and ambition of the men and women who work for Northamptonshire Police, who come to work every day to help others. I am incredibly proud of them and of the Force we represent.

“While this is good news for the Force and the county, now is not the time for complacency and we have much more to do to continue to improve and to reach the standard that both I and our force desire. The plans and developments I have in train will see that continuous improvement over the coming months and years and I know the public will continue to support that work, along with our partners.

“This is by no means ‘job done’, it is a milestone in our ambition and one that solidifies the platform for the continuous improvements of the services we provide.”

Police, Fire and Crime Commissioner, Stephen Mold, today thanked the Chief Constable and officers of Northamptonshire Police for the work that has led to praise from HMICFRS this week for what are described as “impressive improvements”. 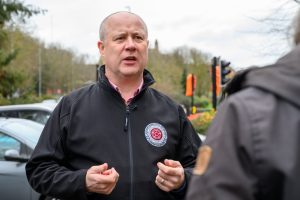 Stephen Mold said: “This is fabulous news and the culmination of an improvement programme and sheer hard work that followed the poor report from Her Majesty’s Inspectorate of Constabulary that refers to the Force how it was in 2018.

“When I appointed Nick Adderley as Chief Constable I asked him to reshape the Force and give it a new direction and focus.  For the last couple of years, it has been clear to me that Northamptonshire Police felt like a Force that was changing significantly, and much for the better. The focus on the crimes that matter to people, on the safety of the vulnerable and on making a difference to victims have been very clear to me through the process by which I hold the Chief Constable to account.

“I have confidence that the investments that have been made in policing in Northamptonshire are giving the Force the tools to do the job, and I thank the Chief and his officers and staff for all the life-changing work that they do every day of the year, and for how they have so clearly moved performance in the right direction.

“So to hear that HMIC share that measure of confidence and recognise what they call ‘impressive improvements’ being made by the Force is very satisfying.  I want the people of Northamptonshire to feel safe and to be safe and I know that there is very much more work for the Force to do. We have established firm foundations on which to build and fulfil the ambitions that the Chief Constable and I both have for the Force.”