Police, Fire and Crime Commissioner to ask for 20p a week extra towards policing

Northamptonshire Police, Fire and Crime Commissioner Stephen Mold is asking for a £10 a year increase – 20p a week – in the policing precept, the part of the council tax that goes towards policing in Northamptonshire. 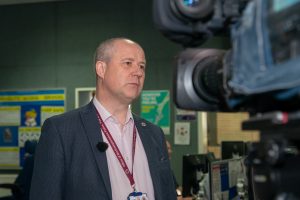 Northamptonshire has received a better than expected financial settlement from the Government that will support the recruitment of 57 extra officers. The settlement was based on the expectation that Commissioners would increase the council tax precept by £10 for a band D household.

PFCC Stephen Mold said that after weighing up the options, he would ask for the £10 increase. He said that the extra funding would be used to build on the investments in policing that have been made over the last two years and to ensure that the Force can continue to afford the increased number of police officers in future years.

He also pledged to invest more to reduce demand on police and to set aside a significant sum to enable the Chief Constable to focus on the areas that really matter to communities.

The Government has now announced extra funding to enable the recruitment of more police officers across the country. Northamptonshire’s share of this allocation will mean the Force is able to recruit 57 further officers, which will boost officer numbers again, to 1367 officers by March 2021.  Whilst funding for future years is not confirmed, Northamptonshire’s total share of the increase will see funding for over 190 extra officers. This will take the Force to over 1500 officers by 2023.

An increase in the council tax of £10 this year will make the costs of the extra officers more affordable and make sure increased police numbers are more sustainable in the future.

In a consultation on the council tax precept carried out for the Police, Fire and Crime Commissioner, 71% of people said that they would pay more towards policing in the county.

“People have told me very clearly that they want to see more police and a focus on crime and they are prepared to invest more to support that. In asking for this increase, I am very aware that local taxpayers have contributed more to policing locally but I have had to balance my reluctance to ask for more money with the need to provide the force with the resources to keep the county safe,” Stephen Mold said.

Alongside the growth in police officer numbers, last year’s council tax increase also supported a pledge to improve the response to burglary, with a visit to every single victim of household burglary and the setting up of a burglary team to focus on detecting crimes and targeting offenders.  A focus on street level drug dealing was also promised, and this has been fulfilled through high profile operations like Operation Redwood and Operation Lily that have between them resulted in hundreds of arrests.

During the coming year, the Commissioner will earmark £750,000 from which the Chief Constable will invest on increased activity in priority areas of work that affect everyday life in communities across Northamptonshire.

PFCC Stephen Mold said:  “I never take public support for granted and I am very grateful for the increased contribution that local taxpayers have made, which have kick-started improvements and given the Chief Constable the tools to strengthen policing.

“Over the coming months, we won’t just be increasing police numbers and focussing on deterring and detecting crime, we will be looking at ways to reduce demand in the first place.  This is one of the fastest growing counties in the country, projected to grow by more than 60,000 people by 2023, so however many more police officers we recruit and however much extra council tax revenue this brings in, demand will continue to outstrip supply.

“I will be investing more in commissioning schemes to prevent crime and stop people reoffending, to turn off the tap and bring down demand for policing services.  And I will be asking the Chief Constable to work with the Chief Fire Officer to ensure that support services and buildings are shared as much as possible so that we can be effective and invest as much as possible in frontline services.”

An increase of £10 in the council tax precept this year will mean that in 2020/21, a band D household will contribute £255.04.  The overall Northamptonshire Police budget is made up of both local funds and grants from central government and will be almost £147million in 2020/21.

The proposed increase will be discussed by the Police and Crime Panel at a meeting held at County Hall at 12.30pm on February 4.