What is Modern Slavery? 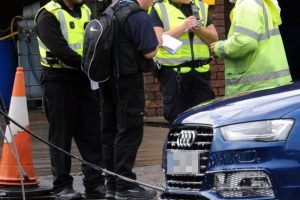 Modern Slavery can take many forms, including the trafficking of people, forced labour and servitude.

Although slavery is illegal in every country in the modern world, it still exists today and can affect anyone, regardless of their age, gender and ethnicity.

The following definitions are encompassed within the term ‘modern slavery’ for the purposes of the Modern Slavery Act 2015.

‘Slavery’ is where ownership is exercised over a person
‘Servitude’ involves the obligation to provide services imposed by coercion
‘Forced or compulsory labour’ involves work or service extracted from any person under the menace of a penalty and for which the person has not offered himself voluntarily
‘Human trafficking’ concerns arranging or facilitating the travel of another with a view to exploiting them.

*Figures taken from www.unseenuk.org/modern-slavery/facts-and-figures
*Figures were last updated in October 2017

A multi-agency Modern Slavery Working Group was set up  in Northamptonshire in 2018 to tackle modern slavery in the county and is chaired by the OPFCC.  The group includes senior level representatives from the County Council, the Police and Crime Commissioner’s Office and the Police as well as charitable organisations. The Group seeks to ensure that Modern Slavery and Human Trafficking is prevented, identified and challenged across the County.

Below are some of the signs that might indicate trafficking. This is not an exhaustive list. If you have any concerns about an individual or a situation please call the police.

The Home Office has produced guidance for public sector staff, and may also be useful for members of the public or businesses, which can be found here.

If you believe a person is being trafficked and is in immediate danger, you should call 999 straight away.

To report concerns, get advice, or seek help, call the confidential UK Modern Slavery Helpline 0800 012 1700 or visit the website

You can also report suspicions of trafficking by calling 101 or through the website www.northants.police.uk [INSERT LINK]

The Modern Slavery Working Group has developed a modern slavery strategy. This acts a foundation for partnership activity over the next two years. For further information, please contact Paul.golley@northantspfcc.pnn.gov.uk 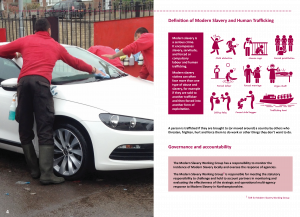