More than 2,000 free security packs, which contained useful crime prevention and fire safety information along with several promotional products, have been distributed in the areas. A further 530 enhanced security packs containing more than £100 of free security products were given to the most vulnerable residents.

In addition, 250 properties have received new police approved secured by design front doors to deter burglars from entering homes and 50 cycle store cupboards have also been replaced in the Bouverie area. Offenders had been known to attack the power in these cupboards in order to gain access to adjacent flats, as well as using them to store drugs and stolen property.

The initiative is a significant step forward in the fight against crime in Northampton. Police, Fire and Crime Commissioner, Stephen Mold, said: “We are tackling community safety issues where they are most needed and taking proactive measures to deter acquisitive crime in the most vulnerable areas. Burglary and theft are crimes that can be incredibly distressing for the victims and leave a sense of vulnerability in what should be a safe place.

“Working with local partners such as Northampton Partnership Homes will help us improve public safety and will contribute to achieving long-term reductions in acquisitive crime and help to reduce the fear of crime among residents.”

Mike Kay, Chief Executive of Northampton Partnership Homes, said: “This funding has enabled us to tackle some of the issues that affect residents most and I’d like to thank the residents who engaged with us throughout our work in the area.

“We have a great working relationship with The Police, Fire and Crime Commissioner. The success of this project demonstrates how much can be achieved in the community by developing strong local partnerships.” 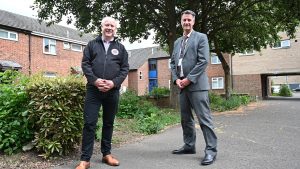 Northampton Partnership Homes is also funding some environmental changes, such as removal of high walls, to improve visibility and surveillance capability in these areas.

An NPH resident who received a new front door, said: “I’m delighted with my new front door, which I think looks lovely. It looks and feels really secure, so I feel a lot safer in my home. I can’t thank you enough for the work you’ve done, which makes me feel safer and means the estate looks smarter too!”

This investment was possible following a bid from the Commissioner’s Office to the Home Office for a grant from the Safer Streets Project.  They secured a grant of £1.45m to invest in practical solutions to help people of Northamptonshire protect their homes and properties from criminals and reduce the types of crime that affect those communities the most.

These measures follow a number of other initiatives implemented to improve the safety of residents and visitors to Northampton.  Sixteen more CCTV cameras were installed in St Crispin’s Ward, 30 Streetpods to safely park bikes have been set up on Wellingborough Road and Kettering Road and seven car parks have been improved to meet the Park Mark standard.

This month (June) the Police, Fire and Crime Commissioner has been awarded a further £432,000 from the Safer Streets project, to make safety improvements on the Hemmingwell Estate in Wellingborough.