– Stephen welcomed all to the meeting.

– The minutes from the previous meeting were agreed.

– It was agreed that an overview of the benefits of the Sponsored PCSO scheme would be shared with the COT Team.

– ACTION – PF to provide this at an appropriate point in the schedule of contract management meetings.

– It was noted that risk evaluations would be carried out should the scheme be extended.

– It was made clear by PCC that in cases where local communities had sponsored a PCSO there must not be a reduction in the core operating model of allocated PCSO as this scheme was about additionality.

– All other actions were discharged.

– SM clarified his position regarding establishment numbers and agreed that additional work would be carried out before the next meeting.

– It was noted that there could be an increase in ill health retirements next year.

– It was noted that there has been an increased expenditure of overtime in the first quarter this year due to increased demand.

– There was a discussion in relation to overspend on redundancy budgets. SM questioned whether these redundancies were bringing longer term financial savings.

– PD provided explanations for overspends detailed in the report.

– SM noted that the forecast overspend originally had been £1.6 million and that this level of overspend is not sustainable going in to the next financial year. Financial control must be robust.

– NA gave reassurance that there will be some reconfiguration within the Force to control overspend, however NA noted that some of the forecast overspend has been unavoidable.

– RS provided reassurance that the Change Board places a significant focus on spending.

– It was noted that there is a programme of work designed to identify savings.

– PD advised that it is unlikely that the budget will be balanced this year, however any funds taken from reserves would be replaced next year.

– SM requested clarification regarding overspend on overtime, JA advised that this is due to the percentage of the workforce that is not deployable, on annual leave, sickness or carrying vacancies.

– SM suggested that there could be a more robust process for approving overtime which could have assisted in controlling overtime spending.

– PD provided reassurance that these processes are being implemented.

– SM noted that there have been improvements from previous budgets.

– JA noted value for money provided by the FCR.

– PF advised that charges for SPS are agreed in line with NPCC guidance.

– ACTION: SM requested an update report from NA on specialist policing services, covering the circumstances in which the Force charge.

– It was noted that SM had not supported additional staff funding for Operation Tuckhill but was content to keep this under continual review with the Force.

– RS advised that she expected the investigation will run into 2019. RS provided reassurance regarding the progress of the Operation.

– NA noted that increasing costs from EMOpSS are not acceptable.

– NA advised of potential overspend for EMSOU and provided reassurance that he will seek Value For Money and will brief PCC on forthcoming proposals from EMSOU..

– SM noted that financial control has been greater this year, however overspend is not sustainable for 19/20.

– RS requested that a review is commissioned to independently review of MFSS and assessment of other options available to provide the same service. SM agreed that the OPCC would support this.

– It was noted that the Force has seen a spike in demand that has resulted in increased pressure and some backlogs.

– SM noted that there is some inconsistency in figures used, relating to establishment numbers

– SM drew attention to increase in sickness days. JA advised of pressures during summer period which is likely to have caused the increase.

– Support was noted for increase in PPNs submitted.

– It was noted that there should be independent scrutiny of out of court disposals in relation to domestic violence.

– The upward trend in sexual abuse was noted and JA provided reassurance of ongoing work to mitigate this.

– JA noted changes in recording rules and advised that he has commissioned a review of the burglary process.

– SM noted his support for this review.

– NA provided reassurance that burglary will be part of any reviewed policing strategy.

– JA noted increased buy in from neighbourhood policing teams in relation to serious and organised crime.

– SM requested clarification regarding figures relating to violent crime. Discussion ensued relating to the range of activities and offences that were included in these numbers.

– It was agreed that there should be more positive news stories in order to improve public confidence and keep public informed, which will be carried out by two posts in the corporate communications department.

– SM noted increase in demand that coincides with the implementation of the SDM. RS advised that this could be due to improved processes.

– Ongoing criminal justice work being carried out in the OPCC was noted.

– RS noted that implementation of single online home is expected within Q1next year.

– AN gave update on Establishment numbers.

– AN noted that there were pressures when increasing officer numbers based on classroom availability, trainer availability and also tutor availability due to the increased numbers being brought in.

– SM requested clarification regarding the figures provided in the report.

– AN provided reassurance that current figures show PCSO strength above base establishment.

– SM raised concerns that there is no scheduled PCSO recruitment until next year.

– AN advised that she is exploring opportunities to share a recruitment process for PCSOs with Leicestershire.

– PF noted concerns regarding backfilling PCSOs in districts where there are Sponsored PCSOs. It was agreed that this needed to be monitored in order to make sure that this took place so that the scheme remained about additionality.

– AN advised of difficulties in continuing the Sponsored PCSO scheme on an ad hoc basis due to changes in the recruitment and training programmes.

– ACTION: PF to work on pulling together a timeline for the Sponsored PCSO Scheme.

– SM noted that the OPCC can underwrite being over establishment by 10%, in relation to police officers.

– SM noted concerns regarding reaching establishment due to counting of sponsorship posts. AN provided clarification and advised of deployable resources.

– Clarification was provided regarding counting of EMOpSS resources which are included in base establishment.

– NA provided reassurance that he will seek a better understanding of the functions and resources available to Force within the next 4-6 months.

– SM requested some insight to the impact that reducing strength has had on policing.

– AN noted increasing attrition rates due to changes in the Police Officer Pension Scheme.

– SM requested update on the recruitment of the 18 additional police officers. RS advised that there are 5 outstanding vacancies for Police Officers and recruitment should be completed by the end of November.

– It was agreed that funding would not be provided until establishment is increased to reflect these changes.

– SM requested clarification regarding the Officers sponsored the University of Northampton. AN provided clarification, confirming that the overall establishment now included and accounted for these.

– There was a discussion regarding the apprenticeship scheme and the impacts this will have regarding establishment and abstraction rates.

– It was agreed that NA would explore this further outside the meeting.

– There was a discussion regarding the reduction of average recruitment times of around 9-11 months and opportunities to reduce this. It was noted that this should be a consideration in setting the budget for nextyear. NA provided reassurance that this will be clarified in a proposal.

– It was agreed that a natural tolerance level should be agreed in relation establishment numbers.

– There was a discussion regarding using part of the overtime budget to pay for additional Officers.

– SM noted the report and it was agreed that this would be discussed outside the  meeting due to time between SM, PF and JA.

6. New Guidelines Relating to the Welfare of Children

– The Force was thanked for the report and the efforts that were going into the new arrangements. Good progress was being made and it was agreed that this would be brought back to the Accountability Board for summer of 2019. 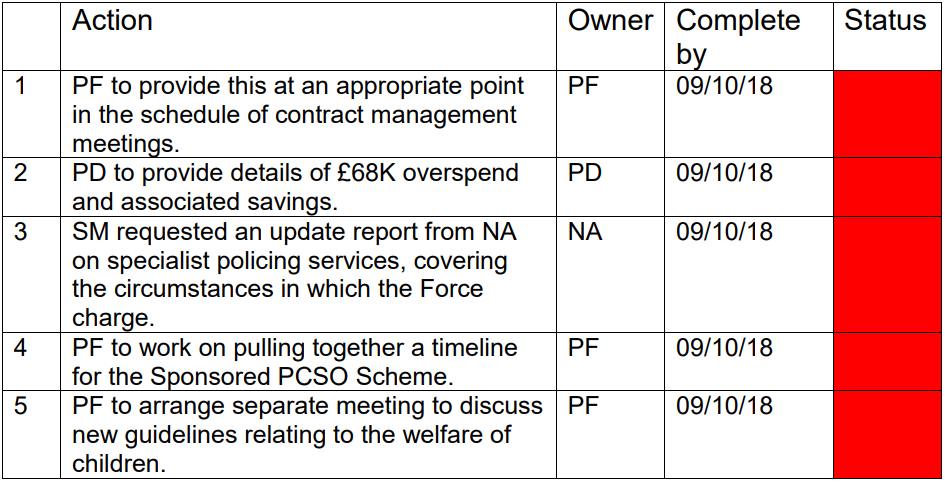