– NA drew attention to the paper and noted concerns with the quality of some of the contents.

– SM noted that this update is important in providing reassurance that the SDM is effective and that the paper does not adequately address concerns regarding the effectiveness of the SDM in terms of some of the service delivery commitments made to the public.

– SM requested that an additional paper is brought to the next Accountability Board that provides simple answers and explanations to the questions And service promises made and that formed the questions set by the PCC as part of this process.MS noted that the SDM was proposed as the answer to a lot of the issues within the Force and that this was widely communicated with members of the public and HMICFRS.

– NA agreed that this report should be deferred and that it should be accompanied by presentations from relevant people.

– NA noted that there are concerns with the effectiveness of the SDM, however performance has improved over all. This was noted.

– NA noted that there is a lot of good work that has gone in to the SDM, however it needs to be more dynamic in order to get performance to where it should be.

– NA advised that the Force will need to evolve and reshape in order to achieve continuous improvement.

– JA noted a need for clear objectives and have ways of monitoring performance in terms of outcomes of these objectives.

– PF noted that the questions posed by the PCC were drawn by promises that Force made to the public during the launch and development of the SDM. These were in fact the service promises made that the operating model would deliver and as such this is what the paper needed to report on rather than an overall evaluation of a delivery model that it was accepted had changed in some degree.

– SM clarified that he requires answers to the questions raised.

– JA noted concerns that the objectives of the SDM may be outdated.

– SM advised that this is an appropriate time to evaluate the outcomes so far and reconsider their relevance and the direction of the Force.

– NA noted that the SDM has not improved public confidence and that communications with members of the public should be improved.

– It was agreed that this item should be deferred to the next meeting.

– PD drew attention to the report and gave brief overview.

– Concerns were noted regarding investments and reduced returns this year due to limited funds available to invest and underperformance of the investments.

– HK gave update on opportunities to maximise returns on investments.

– There was a discussion regarding current and potential contracts and the pros and cons.

– It was noted that the estates strategy is starting to bring additional funds in through the sale of property.

– HK gave update on external debt and advised that she is looking in to this in more detail.

– It was noted that there is now a stable capital programme which provides an understanding that decisions can be based upon. All agreed that this was a positive position compared with previous years.

– There was a discussion about improved information sharing with JIAC whose contributions are valued.

– PD gave overview of report and noted the forecasted over and underspends, including staff pay and MFSS.

– It was noted that the forecasted overspend s likely to change by the end of the financial year but currently was predicted at £500k after the commitments that PCC had made in relation to MFSS and ill health pensions overspends.

– SM noted that he may not be able to continue to provide funding to compensate for overspending on an ongoing basis, without the delivery of proven outcomes or improved performance.

– SM advised of previous promise to fund overspend of pay, however this was conditional on the Force being over establishment, which the Force would need to be able to demonstrate in order to draw down on this funding.

– HK provided clarification regarding figures and noted that the Force has missed an opportunity to secure funding from the PCC as they have not achieved establishment.

– SM noted concerns regarding funding that has previously been given to the Force for additional staff and SM requested reassurance that this funding was used for the additional staff promised.

– ACTION: SM requested figures for Officer and Staff numbers, dating back to 2010 to current.

– PD advised of PCSO pay overspend due to the withdrawal of funding from external partners.

– There was a discussion regarding Operation Contingency and projected spending.

– SM requested assurance that savings are sustainable. PD advised that any costs or savings are put through a structured process whereby they are considered by both the Change Board and the Strategic Board, which ensures that the decisions are fully considered.

– There was a discussion regarding SPS charges.

– ACTION: NA to ensure that a comparison of income received from SPS charges and events policed where they could have been applied in provided.

– SM raised concerns regarding reducing numbers is the Special Constabulary and volunteering. PF provided reassurance that he is working with Mick Stamper to address this and it was noted that hours volunteered has increased.

– ACTION: PF to provide SM with details of the amount of hours volunteered by the Special Constabulary.

– PD noted ongoing overtime costs due to increased demand which is often driven by sickness and vacancies.

– ACTION: PD to provide additional information in relation to overtime costs and the drivers behind it.

– PD provided reassurance regarding the restructure of ISD.

– It was noted that the costs of repairs and maintenance to the Force Fleet have resulted in overspending and a shortage of vehicles.

– There was a discussion regarding opportunities for savings in this area.

– PF raised concerns regarding the Sponsored PCSO Scheme and the budget for next year. PF requested that SM and NA give consideration to this, in particular the need as the scheme is about additionality to red circle PCSO numbers as part of the budget setting process for next year.

– SM gave thanks to PD and HK for their report. 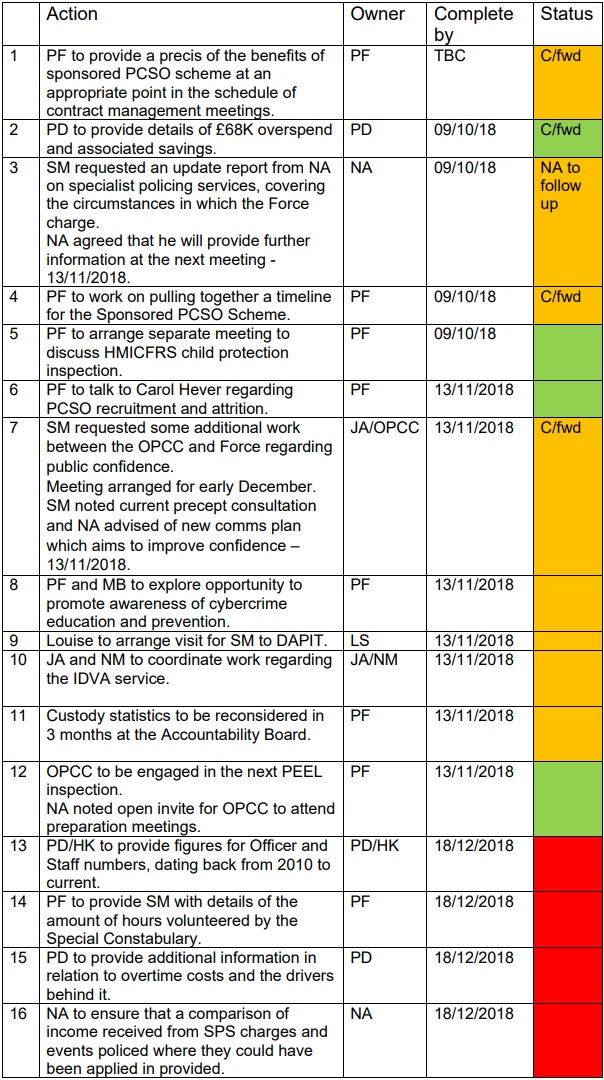