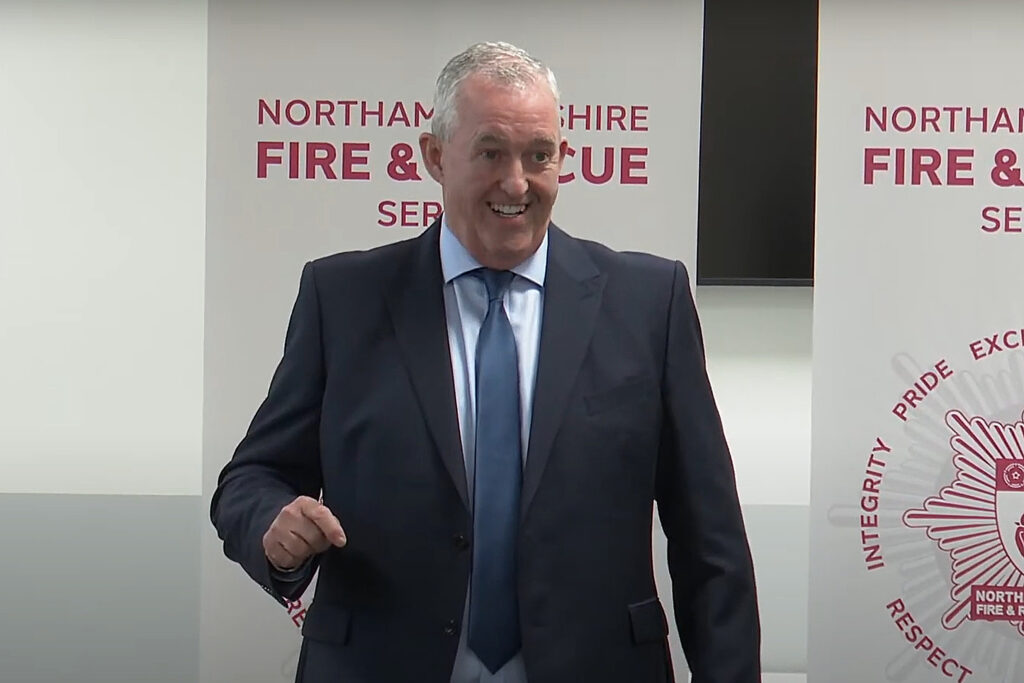 Mark Jones (pictured above) is currently Chief Fire Officer of the South Australian Country Fire Service. His appointment is now subject to confirmation by the Northamptonshire Police, Fire and Crime Panel, which will take place in the next few weeks.

The announcement of Mark Jones as preferred candidate follows a challenging selection process. The candidates took part in two days of activities, where they presented to, and took questions from, senior members of partner organisations, before participating in a ‘question time’ event with firefighters and staff. The candidates then faced a formal interview panel, from which Stephen Mold has identified his preferred candidate.

Stephen said: “I am delighted to announce that following this testing process, Mark Jones was unanimously the preferred candidate to take over the role of Chief Fire Officer of Northamptonshire Fire and Rescue Service. Mark is an experienced and accomplished Chief Fire Officer and is an ideal choice to take our service forward.

“Northamptonshire Fire and Rescue Service has made great progress since 2019, improving its performance and the way it keeps the people of Northamptonshire safe beyond all recognition. I have no doubt that Mark Jones is the right person to take NFRS forward into the next stage of its development, creating a positive, welcoming culture, embracing change, and taking the undoubted skills of the firefighters and staff to build on the already significant work they do in the broader community safety arena.

“The Police and Crime Panel will now consider whether or not to approve my preferred candidate and I look forward to taking my recommendation to them.”

Mark Jones said: “Like all UK emergency services, Northamptonshire Fire and Rescue Service is in a period of evolutionary change and it is an exciting prospect to be part of a team that will continue to deliver top-quality safety services to the people of Northamptonshire.

“The Fire Service has achieved much with tight resources over many years and that is testament to the professionalism of the men and women who dedicate themselves to their roles. My current service is fantastic and I know that the people I have met from NFRS show the same commitment, passion and dedication to public safety and public service.

“I would like to thank the Police and Crime Commissioner Stephen Mold and the members of the selection process for giving me the opportunity to lead Northamptonshire Fire and Rescue Service and I would be honoured to serve the people of Northamptonshire.”

If Mark Jones is confirmed as the next Chief Fire Officer, he will take over the reins when Darren Dovey retires from the post in October this year.

After leaving Buckinghamshire in 2015, Mark moved to Australia and served as the ACT Emergency Services Agency’s “Director of Strategic Reform” for two years. He served as the London Ambulance Service’s Head of Resilience and Specialist Assets in 2019 before returning to Australia, taking on the role of Chief Officer of the South Australian Country Fire Service. Among his achievements he commanded the response to the largest ever series of bushfires in South Australia’s history.

Mark has worked in a wide range of senior operational and strategic leadership roles. He has managed large scale emergencies, events and terror related incidents, and his career has spanned roles in emergency planning and disaster management, operational Fire Command, Fire Safety and Training.

Mark has shown a particular professional interest in the fields of fairness, equality, and diversity, and these were his key responsibilities as he served as an Inspector in Her Majesty’s Fire Service Inspectorate for Scotland in the early 2000s. He also worked on the ‘Women in Emergency Services’ project in Canberra, which saw a significant increase in the recruitment of women into the ACT’s Fire and Rescue Service.