Your council tax precept for police and fire

Northamptonshire Police, Fire & Crime Commissioner Stephen Mold is asking for increases of £10 for police and £5 for fire in this year’s council tax precepts. 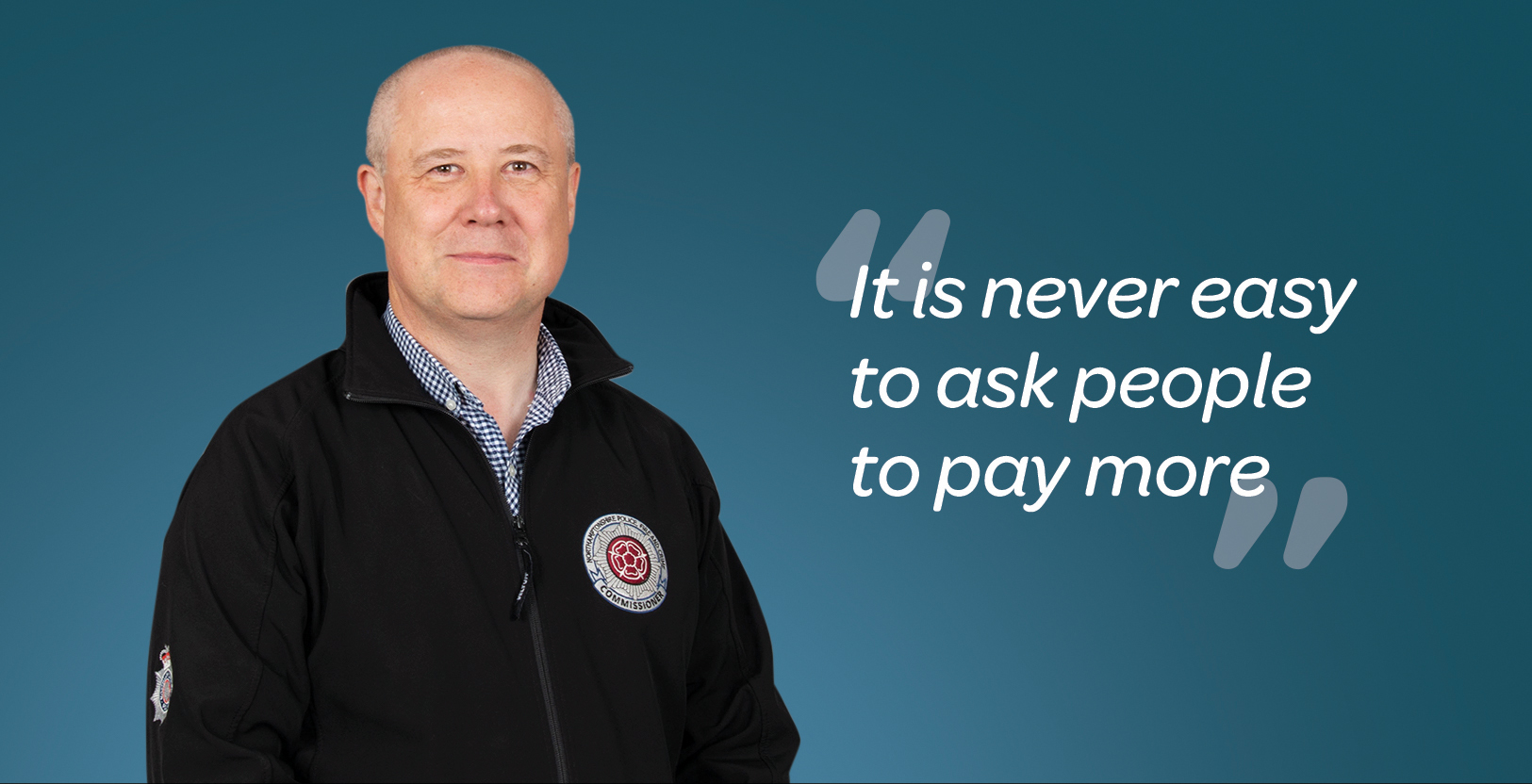 The increase of £10 a year for Northamptonshire Police, around 19p a week for a Band D property, is below the level of inflation and would ensure that the Force can continue with plans to increase the number of police officers to 1500 by March 2023 – the most the Force will have ever had – and sustain these numbers in the long term.

Having more police officers has enabled a greater focus on the investigation of burglary, with the setting up of a dedicated policing team that has successfully reduced the number of offences in the county. Rural and roads policing teams have also grown, alongside neighbourhood crime fighting and problem solving.

Mr Mold is also asking for an increase of £5 a year – under 10p a week – in the council tax precept for Northamptonshire Fire and Rescue Service, which would bring the amount paid by a Band D household in Northamptonshire towards their fire service to £68.20 a year.

Northamptonshire Fire and Rescue Service is the second-lowest funded in the country with the lowest level of reserves. The £5 increase will enable the Chief Fire Officer and his team to continue to replace essential equipment and recruit firefighters.

Police, Fire and Crime Commissioner, Stephen Mold, said: “It is never easy to ask people to pay more for their services, and I know that this year is more challenging than ever. The Government’s funding to Northamptonshire Police is based on an increase in local council tax precept of £10 a year for three years and that will still mean yearly savings must be made but will allow us to press forward with plans for more visible, responsive local policing.

“I’m also very grateful that I have been given the ability to ask for a £5 a year increase in the precept for Northamptonshire Fire and Rescue Service. It will give us stability from which we can modernise and extend the work that our firefighters and staff carry out to make the community safer.”

Around 14% of a household’s council tax goes towards policing, around 4% to Northamptonshire Fire and Rescue, with the rest going to the local authorities.

Several initiatives are underway to help improve the safety of women and girls across the county, particularly in the night-time economy.

The Police, Fire and Crime Commissioner will improve taxi rank security; provide training for staff in licensed premises to help them recognise and offer support if someone is being harassed and run campaigns to encourage people to think about respect and acceptable behaviour.

Northamptonshire Police, Fire and Crime Commissioner, Stephen Mold, said: “We’re very grateful for the Home Office funding that gives us collectively more than £800,000 to support these important improvements in Northampton.
As well as physical crime prevention measures, we’ll be working to raise awareness of the kind of behaviours that make women uncomfortable, and the Police will be targeting offenders who prey on women out at night.

“I know that people across the county feel less safe and more reluctant to go out at night and we want to make sure that women can feel confident and help create a safer environment for everyone.” 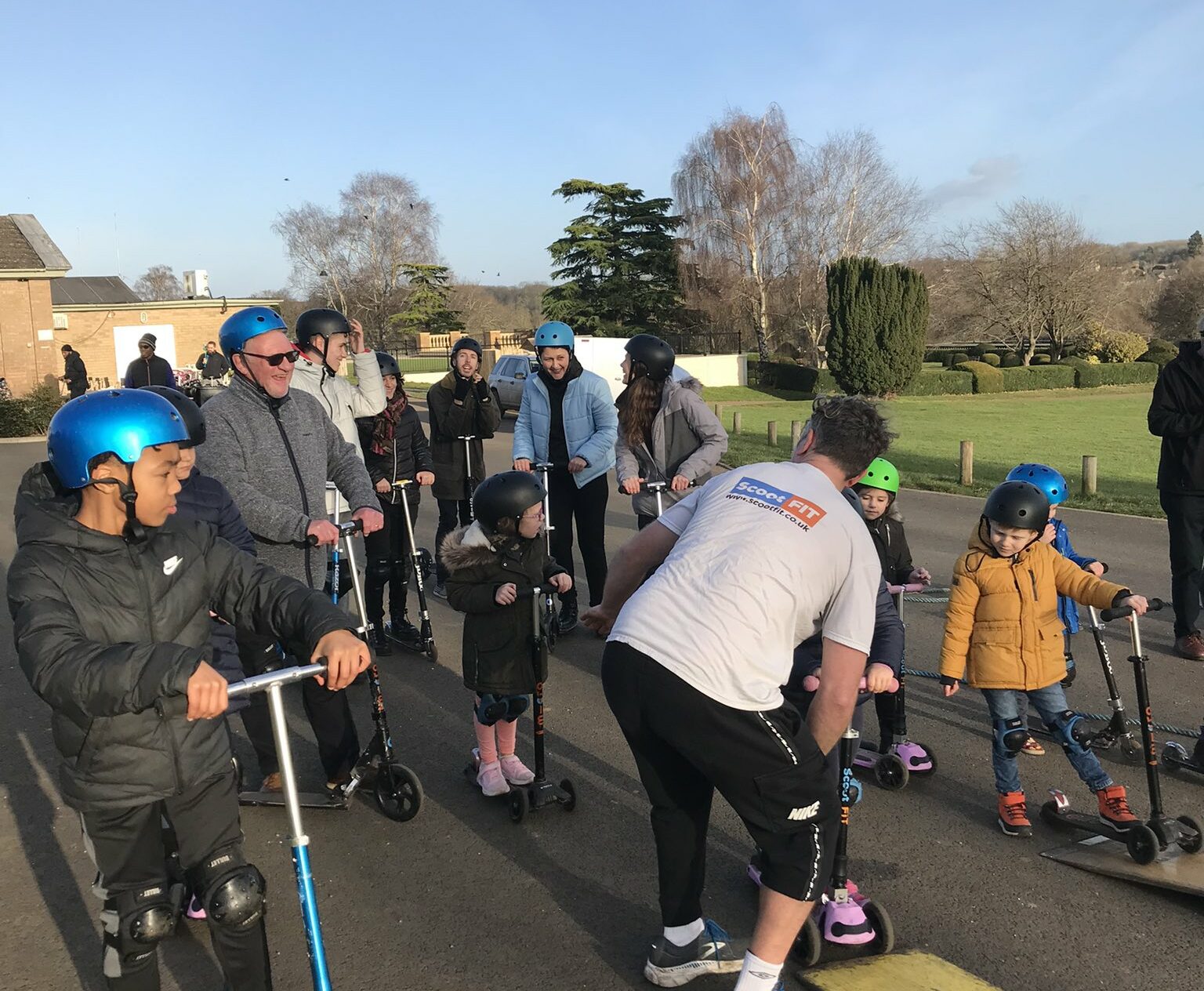 The free sessions at the Kettering venue were organised by social enterprise Brightwayz, with youngsters and their parents learning the ins and outs of safe, fun scooting.

While families enjoyed scooting to a soundtrack, cyclists were invited to bring their bikes into the Park’s Learning Centre for a service, and minor repairs.

Both the scooting and cycle sessions were organised by Brightwayz and formed part of Wicksteed Park’s Active Travel project, which is funded by the Office of the Northamptonshire Police, Fire and Crime Commissioner.

Stephen Mold said: “Scooters are rapidly growing in popularity so it is hugely important that we find ways to educate people and young children on how they can use them safely. “Improving safety in Northamptonshire is a big priority for me, so I have been only too happy to work with Brightwayz to help fund what was I’m sure an invaluable course for those who attended.”

Hundreds of people have already used a new online mapping tool which allows the public to flag areas in their communities where they feel unsafe. 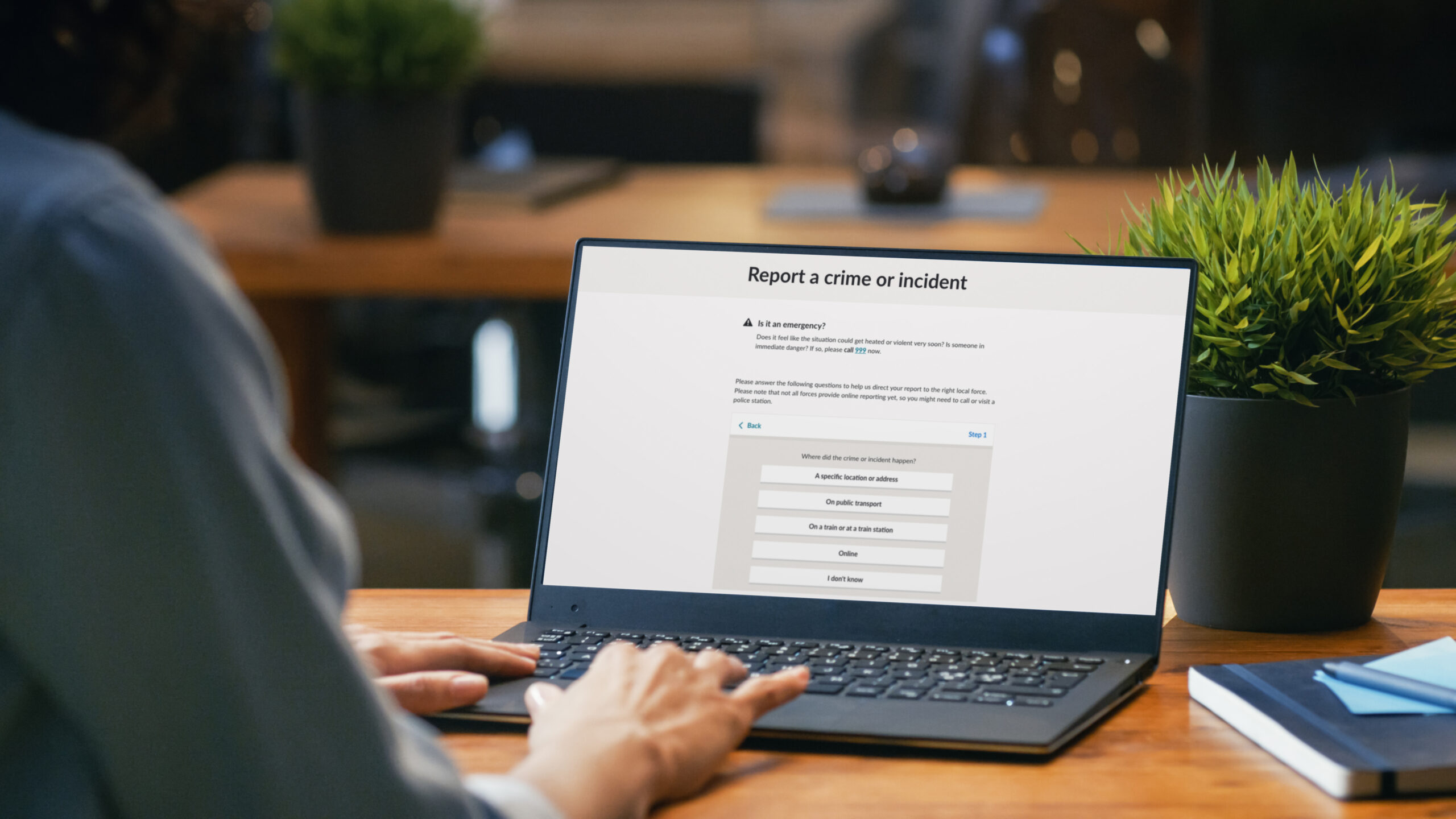 The StreetSafe map was launched in September by the Home Office, and the National Police Chiefs’ Council collects data allowing police forces to understand the specific concerns raised and use the information to make informed decisions on safety.

Although open to everyone, the tool is being used as part of efforts both locally and nationally to tackle violence against women and girls.

Reporting is anonymous and the data gathered for Northamptonshire will be used by the Police, Fire and Crime Commissioner’s Office. Validated trends will be taken to the Community Safety Partnerships in Northamptonshire where Police and Local Authorities will jointly work towards finding solutions.

Commissioner Stephen Mold said: “The first trial phase since September has proved very useful for us, and we’re glad to see StreetSafe continuing for the next financial year. This will really help us reveal any patterns and build solutions for specific local problems.

“And it will form a really important part of the work we are doing in Northamptonshire to target violence against women and girls.”

The Police, Fire and Crime Commissioner’s commitment to delivering early intervention and engagement activities to younger people in the county has been supported by a collaboration between the joint Police and Fire Arson Task Force and the Commissioner’s Targeted Youth Service. 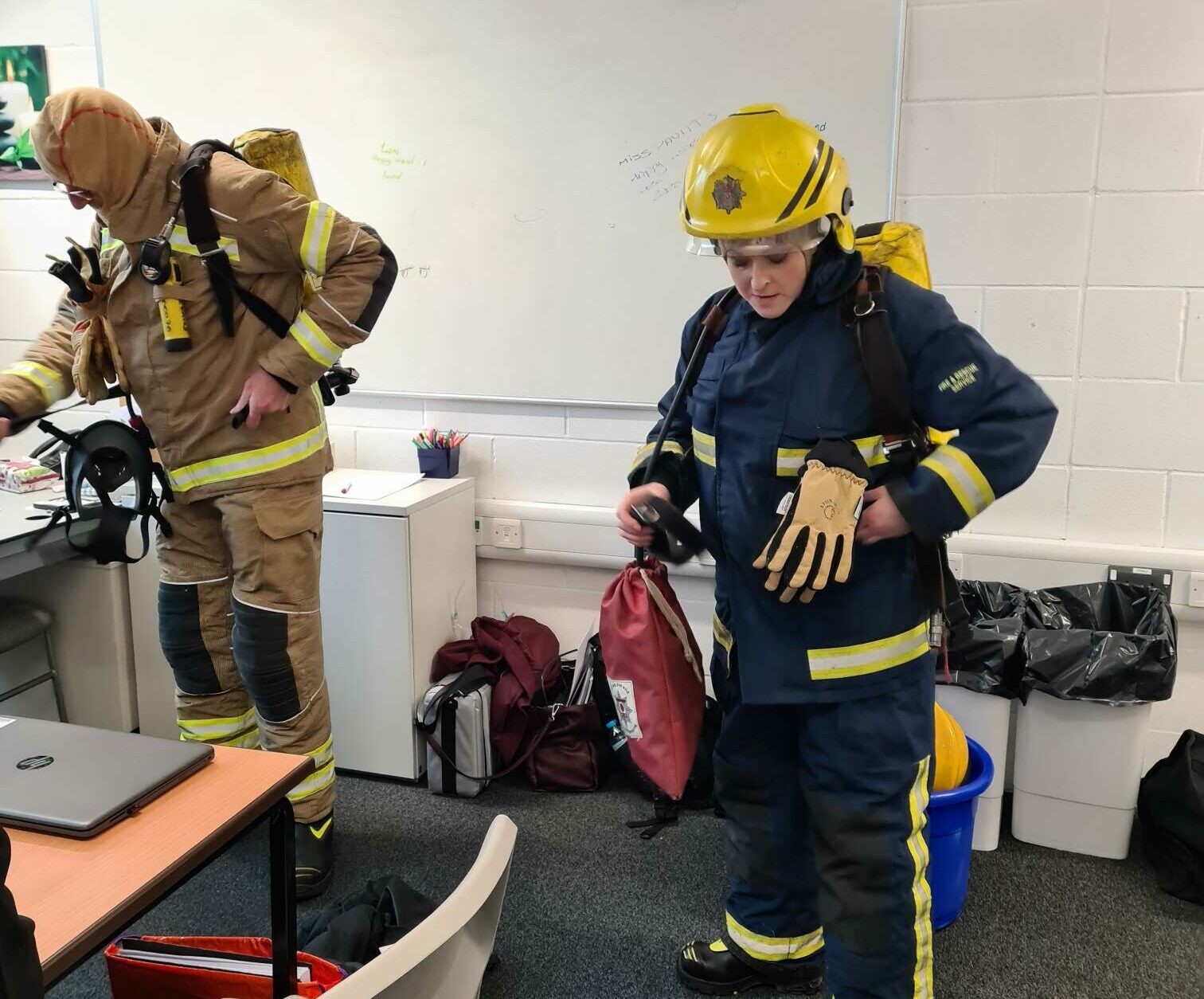 The initiative launched in January as part of a 12-week targeted youth programme that educates young people about risk and danger and sees the Arson Task Force engage with Year 7 students at Kettering Science Academy in an interactive session on deliberate fire setting.

Recent arsons in and around Kettering provided real-life examples of the risks and consequences of anti-social behaviour and educate young people on the impact of arson.

Following the success of this first session, the teams will be rolling out a series of events over the coming months to deliver early intervention that aims to divert young people from criminal activity and build relationships and trust between the younger generation and fire service personnel.

Stephen Mold said: “I am delighted that the Targeted Youth Service and Arson Task Force are working together to deliver early intervention activities, a key priority in my Police, Fire and Crime Plan. The power of partnerships, working to mitigate criminal issues such as arson, is the most effective way to reduce crime and protect residents in the county.”

Kelly Crockett, Arson Reduction Coordinator, said: “Working in conjunction with the OPFCC’s Targeted Youth Service has enabled us to plan a series of activities to target the younger generation and tackle head on the issue of arson in the county.

“We want to educate young people, so they understand the implications of lighting deliberate fires and the potential impact on their future life and job prospects.  The youth programme already in place across the county has provided us with a trusted platform on which to build the vital preventative work that will have a positive impact on community safety.”

Helping to inform on county lines

More than 200 parents benefited from a webinar session educating them about county lines and child exploitation.

The webinar was organised by children’s charity Barnardo’s, but also featured representatives from the charity Pace (Parents Against Child Exploitation), Detective Sergeant Adrian Sharpe from Northamptonshire Police’s Missing Persons Unit, and members of the Early Intervention team and Adverse Childhood Experiences (ACE) officers from the Office of the Police, Fire and Crime Commissioner.

The webinar helped parents understand what knife crime and county lines are, to help them recognise if children are at risk and to learn how offenders groom and exploit children.

By the next day, two parents had contacted the ACE Support Officers at the OPFCC as what had been discussed was ringing alarm bells for them.

Augusta Ryan, Senior Early Intervention and ACE Support Officer with the OPFCC and CIRV (Community Initiative to Reduce Violence), said: “It was aimed at educating parents to understand the risk of child exploitation and what it looks like, and how they can help their children. It was a very free flowing conversation.”

Unite against anti-social behaviour in Daventry

After firefighters were called to a spate of deliberate fires in Daventry town centre in 2017, the consensus was that something needed to be done to tackle a growing and worrying trend. 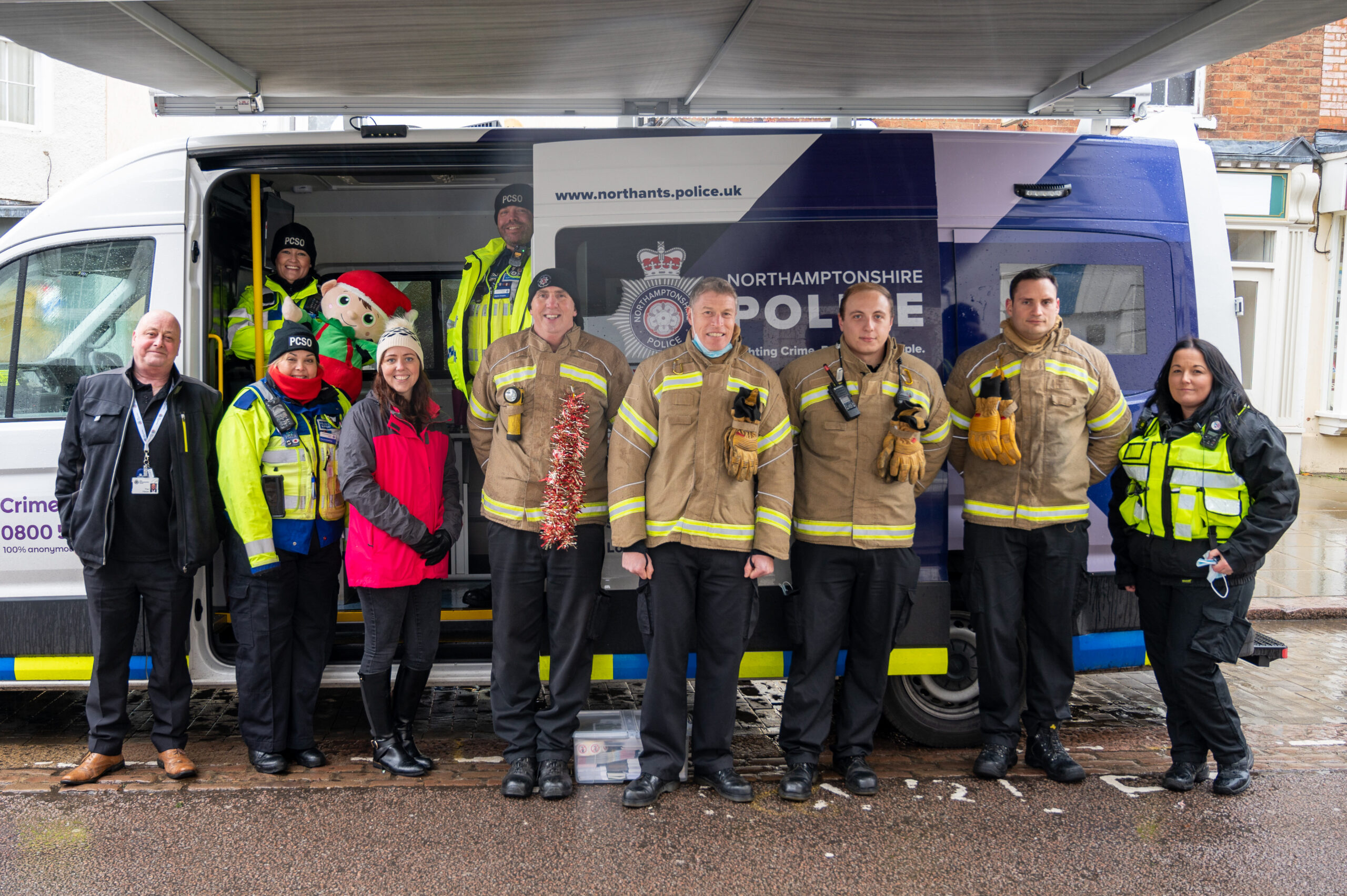 That year saw fire crews called out 77 times to public areas to tackle fires that had been deliberately started. It was at this point that leading organisations in Daventry came together – and the result was Operation Unite.

Norm James, a Community Safety Officer for the fire service’s Prevention team, has been involved from the start, and said: “We went to a Community Safety Partnership meeting and aired our concerns as there was a big discrepancy between our figures and the police’s figures – which was down to the different ways in which they were recorded.

“With the endangerment to life that these fires posed we started working with all these organisations and co-ordinated with each other to do what we could to drive those figures down.”

And the improvement has been stark. Those 77 deliberate fires back in 2017 had dropped down to 17 in 2021, a massive decrease of 78 per cent across the Daventry district. Equally as impressive was that 26 of the deliberate fires in 2017 were in Daventry town centre, but there have now been no deliberately started fires in the town centre in 2020 and 2021.

Kirsten Bates, a Police Community Support Officer (PCSO) in the Daventry Neighbourhood Policing Team, added: “It just highlights and demonstrates the positive partnership working we have here in Daventry. In the past police and fire worked on their own, but now we work together.”

Other aims of Operation Unite include promoting water safety – with partnership work from the Canal & River Trust and the Royal National Lifeboat Institution – as well as creating a safer environment in the Daventry district, reducing waste issues and fly-tipping working alongside Norse, and educating local businesses about fire safety.