Safety improvements introduced in a Wellingborough estate have won praise from the Minister for Crime and Policing. 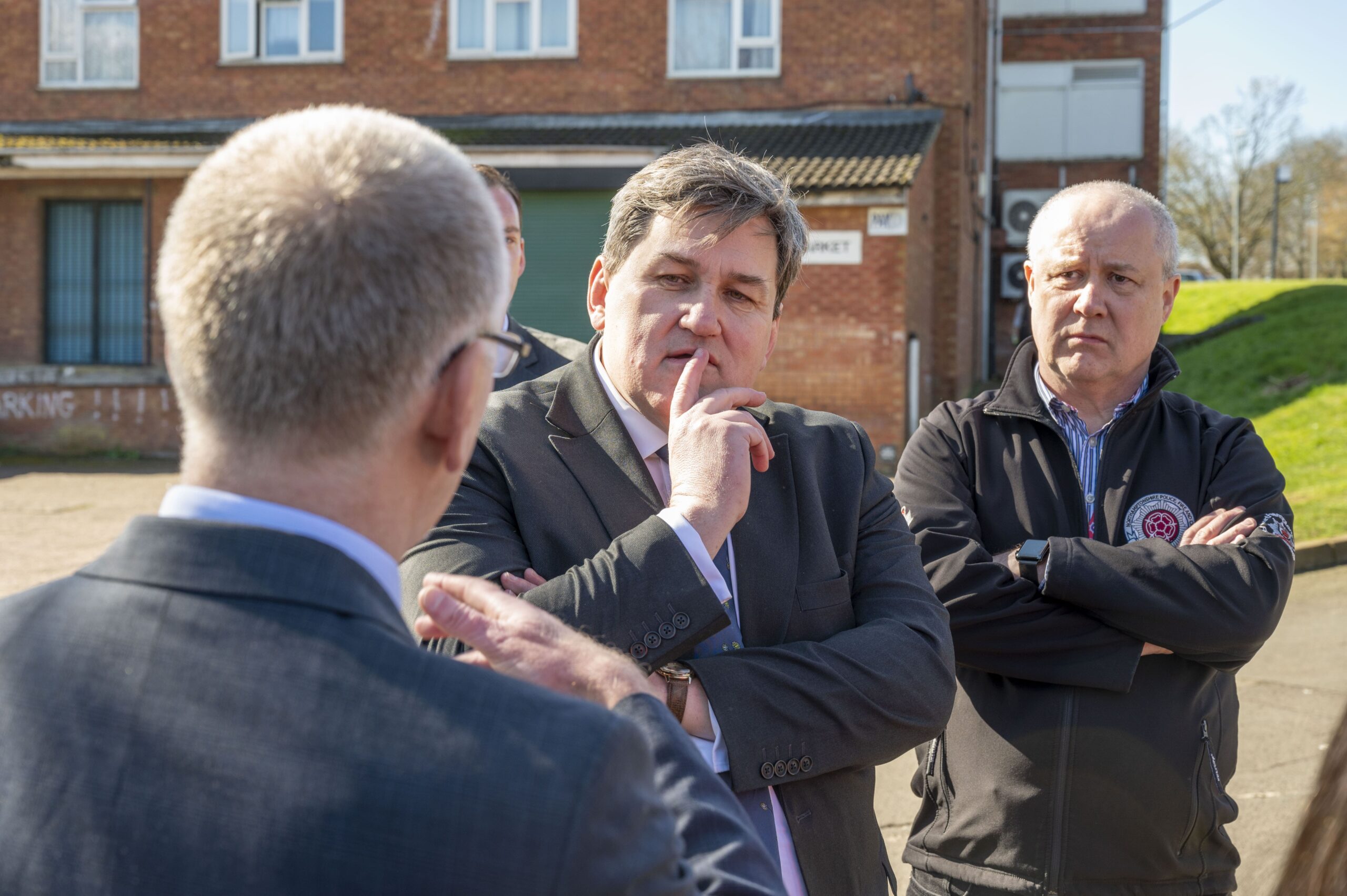 Kit Malthouse MP visited Hemmingwell to get a closer look at how the Safer Streets scheme is improving the lives of residents.

More than £400,000 has been invested in the project, which was run by the Office of Northamptonshire Police, Fire and Crime Commissioner Stephen Mold, and partners North Northamptonshire Council and Greatwell Homes.

It has delivered 540 new doors at properties owned by Greatwell Homes to enhance safety, new CCTV coverage has been installed and hundreds of residents have received free home security products.

Mr Malthouse said: “As well as being tough on criminals, we need to outsmart them where we can, preventing their crimes. The Safer Streets Fund does exactly that, giving neighbourhoods the money they need to target harden their homes and streets, outfoxing villains and making them think twice before offending.”

Police, Fire and Crime Commissioner Stephen Mold added: “We were delighted Mr Malthouse could see first-hand the positive impact we’re having in Hemmingwell. As Commissioner I want to ensure every resident in Northamptonshire feels safe in their home, and the improvements we’re making in Hemmingwell we hope will contribute towards that.”

One of the residents to have benefitted is Gilbert Christopher, who has received a new door at his home. He said: “The new doors make the area feel fresh and I feel much safer with them as they are very secure. It’s a long time coming and finally seeing something being done in Hemmingwell is amazing.”

As well as the current project in Hemmingwell, last year’s Safer Streets saw similar improvements in parts of Northampton, Kettering and Wellingborough. A third bid, submitted by West Northamptonshire Council in partnership with the OPFCC, has won funding to help reduce crime and make communities safer – in particular for women and girls – at The Racecourse and Beckets Park in Northampton.

A new educational podcast featuring Stephen Mold and focusing on the dangers of knife crime will be delivered to young people across Northamptonshire. 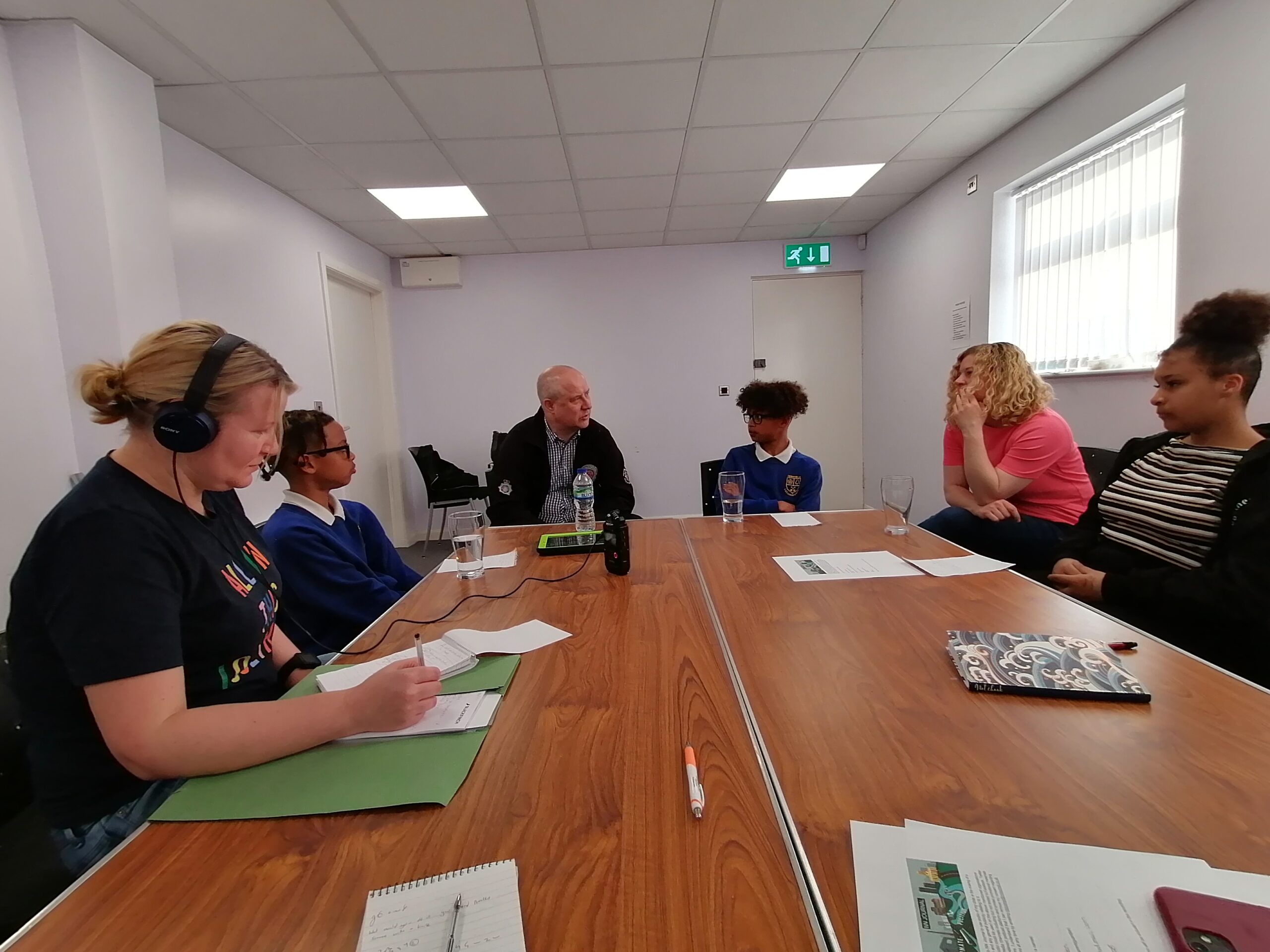 The Police, Fire and Crime Commissioner visited Glamis Hall in Queensway, Wellingborough, to speak with students from Weavers Academy and Finedon Mulso CE Junior School about the efforts he is taking to reduce incidents of knife crime in the county – particularly involving schoolchildren.

The students asked the Commissioner if there would be more police on the streets, what he hoped to change in the community and what were the most effective ways to stop young people joining gangs.

Police, Fire and Crime Commissioner Stephen Mold said: “I was very impressed with the maturity shown by the students that I spoke to, and they were all very keen to hear about what we’re doing to tackle this issue.

“We have more police on our streets than ever before, but we also need to work collectively to prioritise early intervention work which can prevent young people from becoming involved in or a victim to knife related crime.”

Support to divert children from crime

Northamptonshire Police has been trialling a new approach to dealing with children brought into custody called the Trauma-Informed Custody Programme. 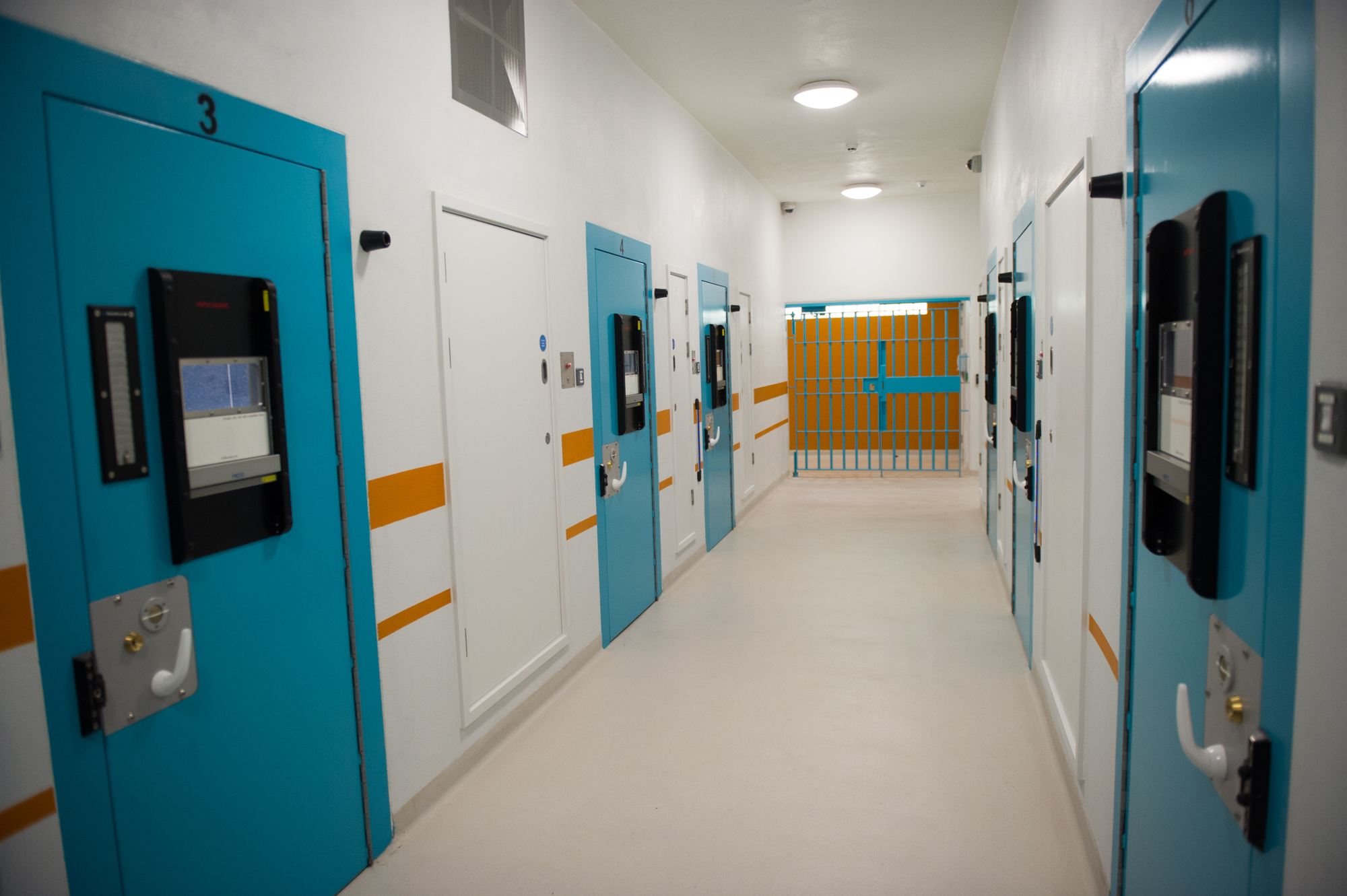 The trial, which involves officers following one of three pathways depending on severity of the crime, was developed by the OPFCC’s Early Intervention Team, the Northamptonshire Youth Offending Service, and the Community Initiative to Reduce Violence (CIRV). The approach enables supporting agencies to visit and assess the child whilst in custody, with follow up visits when home, and considers the effect that their personal circumstances could have had on their behaviour.

This support continues regardless of the outcome of the investigation and children can either be recommended for further intervention programmes or signposted to other agencies for ongoing engagement and support.

Northamptonshire Police, Fire and Crime Commissioner, Stephen Mold said: “Intervening early to support children is a key priority for me. Children generally become involved in crime due to lifestyle influences, trauma, or other significant events.

“Regardless of the outcome of each case, our aim is to break the cycle of crime and point these children to services or programmes that will help tackle the issues they face to prevent them from becoming entrenched in crime.”

Staff who work at three popular Northampton bars have received training to help them identify sexual harassment and intervene safely.

The Picturedrome, The Old White Hart and NB’s Cocktail Bar and Club were the first to receive Shout-Up! bystander training, which was delivered by Northamptonshire Rape Crisis and funded by Police, Fire and Crime Commissioner Stephen Mold.

Shout-Up! originally started in Newcastle in 2017, with Northamptonshire the first area outside the North East to adopt it. It means certified venues have sexual harassment policies protecting staff and patrons and have a publicly available procedure for dealing with incidents of sexual harassment.

Stephen Mold, the Northamptonshire Police, Fire and Crime Commissioner, said: “I’m really happy to support in the funding of this Shout-Up! training and it comes ahead of a wider campaign we have coming up which specifically targets and tries to prevent violence against women and girls.

“Sexual harassment has a huge impact on the lives of those who have suffered from it. This training will help hospitality staff to recognise the potential signs and trigger points of sexual harassment and to intervene in a safe manner and offer appropriate support to victims. Ultimately we hope it will help Northampton to become a safer and more enjoyable night out for everyone.”

Any venue that wishes to become part of Shout-Up! can find out more by visiting www.shoutup.org/venues

Three establishments have become some of the first in the county to sign up to a pioneering licensing initiative that will make their venues safer for customers and staff.

Northamptonshire County Cricket Club (NCCC), The Wig & Pen in Northampton, and The Warren pub in Kettering have all signed up to the Licensing Security & Vulnerability Initiative (Licensing SAVI) shortly after a public appeal from Police, Fire and Crime Commissioner Stephen Mold, who urged venues across the county to take part.

The County Ground hosts a wide variety of events including concerts, awards shows and wedding receptions. Jonathon Taylor, Operations Manager at NCCC, said: “We are committed to making the County Ground a welcoming, safe, and secure environment for everyone. We had no hesitation in signing up for the Licensing SAVI, to demonstrate that we take security seriously and that we support the scheme wholeheartedly.”

Police, Fire and Crime Commissioner Stephen Mold sees the Licensing SAVI as a major part of his strategy to tackle violence against women and girls.

Mr Mold said: “To have these three organisations on board with such an exciting new scheme is fantastic. Efforts such as these can be crucial in helping to keep everyone – especially women and girls – feel safer when they are out.”

Venues can find out more by visiting www.northantspfcc.org.uk/savi/

Eighteen new firefighters have been welcomed to Northamptonshire Fire and Rescue Service after a successful recruitment campaign at the end of 2021. 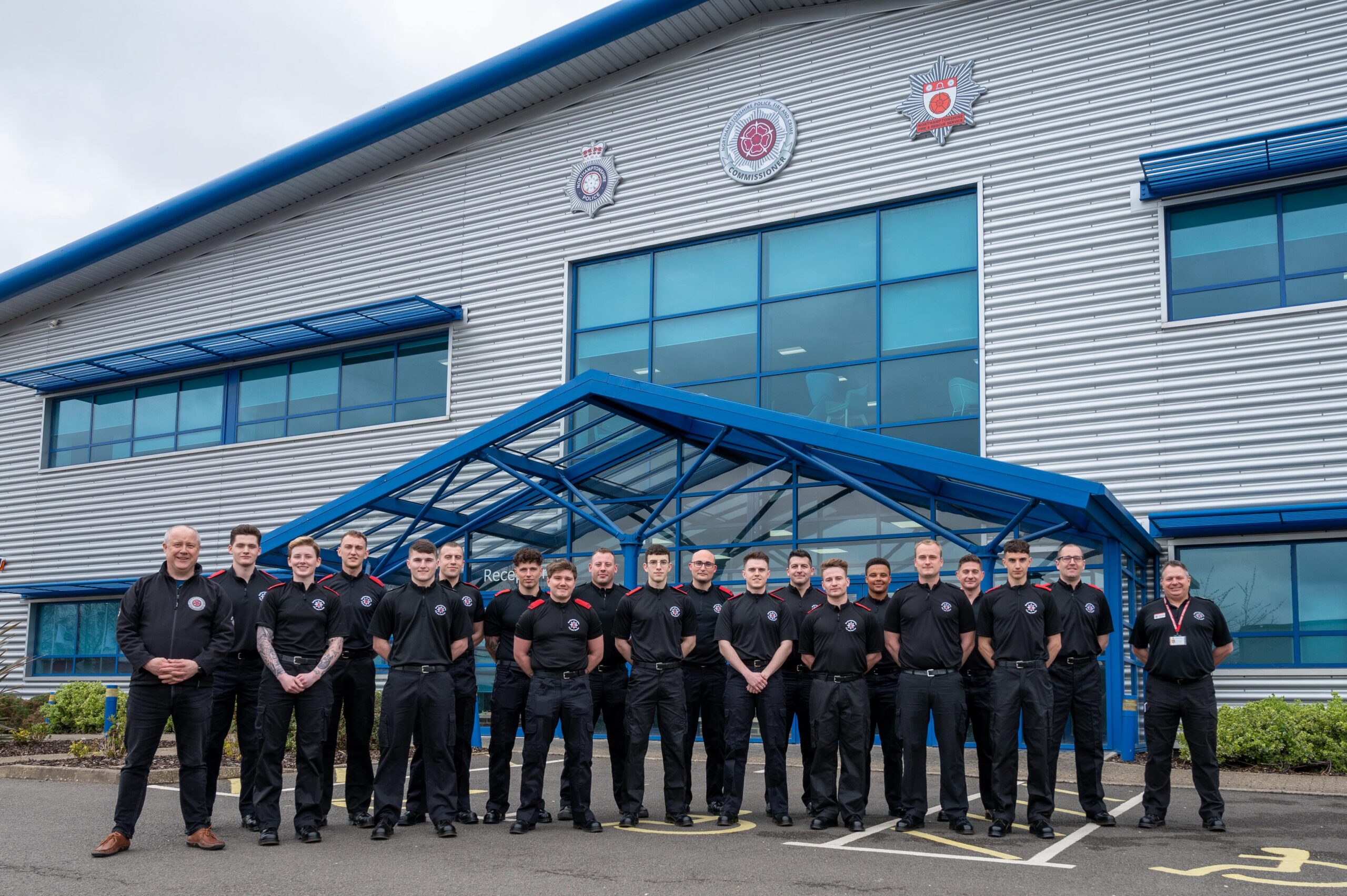 The new recruits were formally welcomed to the organisation by Police, Fire and Crime Commissioner Stephen Mold and Chief Fire Officer Darren Dovey.

Four of the new recruits are already familiar to Northamptonshire, having been on-call with the Service and opting to make the role full-time.

The remaining 14 are new to firefighting altogether and will undergo an eight-week training session at the Fire Service College in the Cotswolds before returning to Northamptonshire for a further two-week course before joining their stations.

Chief Fire Officer Darren Dovey believes it shows the positive place the Service is on in its journey under the governance of the Police, Fire and Crime Commissioner.

He said: “It shows that people view us as an exciting place to come and work. That is testament to the hard work everyone has put in over the last few years to improve us as an organisation, and I’m really confident that the upward trajectory is going to continue thanks to the new talent that we are attracting to join us.”

Police, Fire and Crime Commissioner Stephen Mold added: “It was fantastic to come and meet our new firefighters at Darby House and have a chat with them about the exciting journey we are on.

“This investment is both modernising the service so that firefighters can do more to help prevent fires and in wider community safety, and it’s also ensuring that Northamptonshire is a safer place to live.”

Police, Fire and Crime Commissioner Stephen Mold has invested over £30,000 in ground-breaking virtual reality technology that will modernise crime and prevention campaigns and help improve engagement. 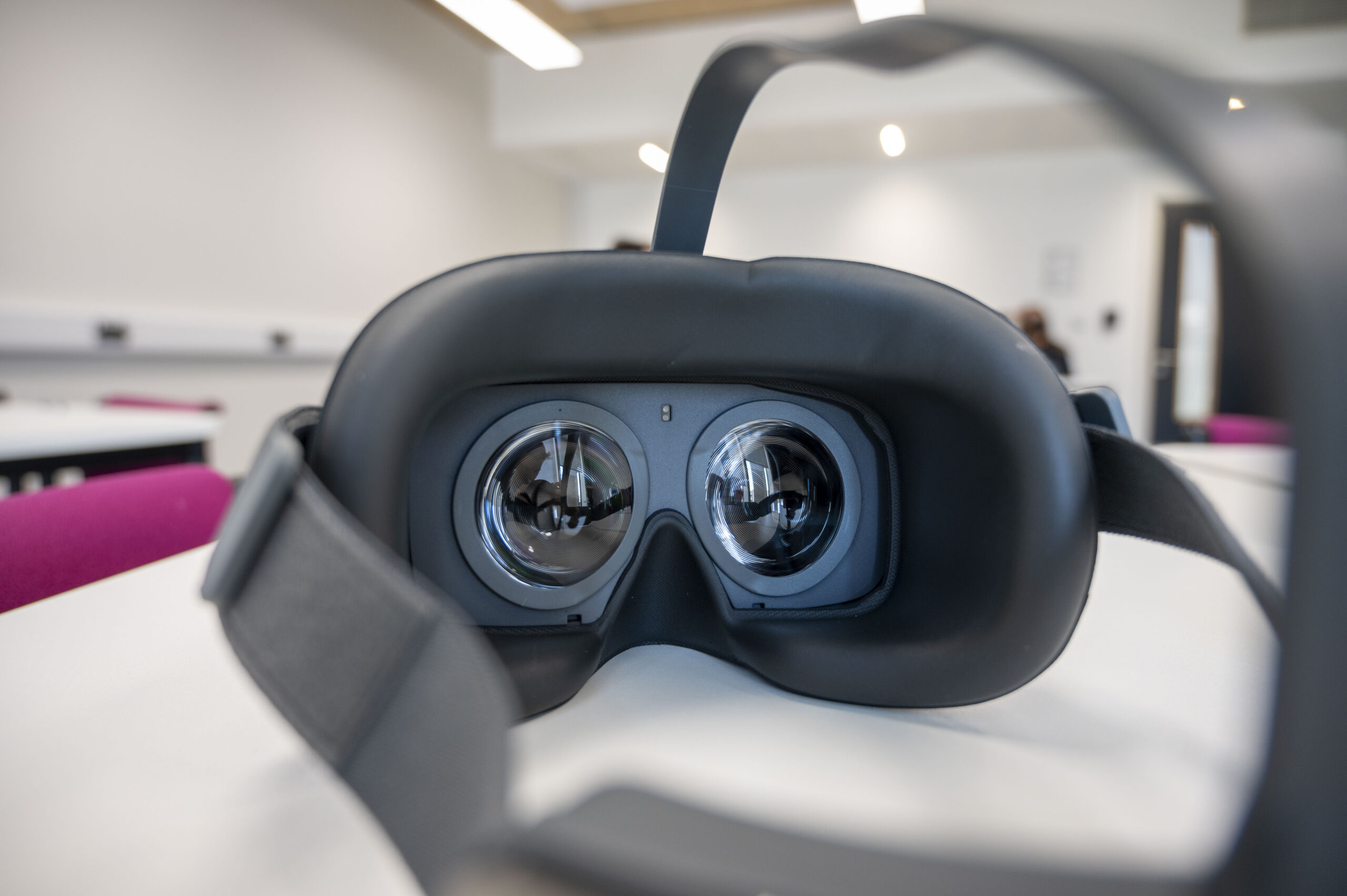 In partnership with RiVR, the Office of the Police, Fire and Crime Commissioner has purchased 20 virtual reality headsets that will be loaned to local organisations. The VR sets will allow people to take part in virtual scenarios that form part of safety initiatives and campaigns being done in partnership with the OPFCC and Northamptonshire Fire and Rescue Service.

As well as the headsets, a 360-degree camera and tripod will also be available to be loaned so that partnering organisations can create the content that will be featured within the virtual headsets.

Once wearing the headset, users will be fully immersed and can effectively be placed in tailor made scenarios – and be given relevant safety advice and prevention messaging.

The VR sets are likely to play an important part in the Commissioner’s upcoming campaign to target violence against women and girls, offering users a unique perspective on the impact such behaviour can have on victims.