This is my first newsletter for a while but now that the elections are over, I can focus on the important business of putting communities – rural and urban – at the heart of what drives our police and fire services.

We have more police officers and more firefighters than ever before, and I am committed to making sure that they provide high quality services that keep Northamptonshire safe and make its residents feel safer than ever.

There is still more work to do. I will be working hard with the Chief Constable and the Chief Fire Officer to build on the progress that we have made, such as the significant reductions in burglary and the improved fire response times and availability.

There will be more focus on neighbourhood policing, with named officers in all rural and urban communities and a greater focus on community safety activity. I want to see work to reduce the harm from domestic abuse and on early intervention to protect children and prevent crime.

You can read more about the work going on in this newsletter and I look forward to getting out around the county as soon as I can.

The renewed focus on neighbourhood policing takes a further step as 13 new recruits take up their first posting on a neighbourhood team, and new livered vehicles are introduced to help teams become more visible and accessible in their local communities.

The additional officers and new vehicles are part of the changes to local policing announced by the Police, Fire and Crime Commissioner and Chief Constable earlier this year, which will see the number of neighbourhood constables increase from 50 to 100 by mid-2022, with the ambition for a further 60 by 2023.

The increase in officer numbers means, for the first time, a cohort of new recruits will begin their policing career in a neighbourhood team. Thirteen new officers completed their initial training last month and are now progressing with the next stage of their development under the guidance of experienced neighbourhood officers.

To support the increase in officers, neighbourhood teams have been given additional patrol vehicles, which include four new Skoda Octavias.

Northamptonshire Police, Fire and Crime Commissioner Stephen Mold said: “I know how important it is to people that their police are truly local – visible, accessible and focussing on the crime that matters to them where they live and work.

“We have the benefit of more than 200 extra officers in the past four years, with more than 100 still to be recruited by 2023 and I am determined that we now make the most of this and get more police out on the beat and into the heart of the community. I am delighted to see the new recruits begin their policing career in such a vital role.”

Chief Constable Nick Adderley said: “Fighting crime and protecting people is what we do and our neighbourhood officers are at the core of this. By putting more bobbies back on the beat, we will be more visible and better connected with local people.”

The recruits have now joined their neighbourhood policing team colleagues on patrol across the county, as they start to understand the issues which matter the most to residents.

PCSOs Dan Skevington and Rea Abbott-Huckin will be serving Northampton town centre. Joining them on the West Local Policing Area are Danni Morgan and Chris Dudley, who will be based at Brackley and Towcester respectively.

Joining the North Local Policing Area are Kev Rowlatt and Adam Ross will be based in Wellingborough, Linda Green joins the East Northamptonshire team and Hannah Smith will be serving the communities of Kettering.

However, despite their different backgrounds, their reason for becoming a PCSO is the same – wanting to make a difference to the communities they will be serving and giving victims a voice.

PCSO Danni Morgan said: “The neighbourhood policing team provides a vital link between the Force and our local communities. As we’re out and about, people get to know us and we offer a friendly, familiar face to speak to.

“Response officers deal with the immediate incident, whereas as a member of the neighbourhood policing team, we can spend more time addressing the underlying issues, which matter the most to our local communities.”

Northamptonshire Police, Fire and Crime Commissioner Stephen Mold said: “I’m really excited by the fact that we are strengthening our neighbourhood policing teams across the county. PCSOs carry out such a valuable role and our new recruits are so focussed on making a difference to the communities they serve, I know they will make an impact.”

More than 800 families across the county have received support from the ACE (Adverse Childhood Experiences) Team, a project set up to provide early intervention in domestic or family related incidents.

The ACE Team was set up in February 2019 and over the past two years, has helped 830 families, with a total of 1,514 children and young people.

The Team works with families in situations where police have been called to domestic incidents that are unlikely to result in prosecutions, or when they are referred by a school if a young person is at risk of exclusion, for example.

Workers from the ACE Team work with the family to offer support to prevent issues from escalating further, including giving guidance on issues like domestic abuse, relationships, parenting, online safety, mental health and substance abuse.

Their work is complemented by two specialist Domestic Abuse Support Officers, whose role is to help people in incidents where the police have been called specifically to a domestic incident regarded as low level.

Since their appointment in January, the Domestic Abuse officers have dealt with 272 incidents, supporting 458 children.

Stephen Mold said: “This team is providing a really valuable service, meeting the needs of families who, without some support, are likely to come into contact with Northamptonshire Police and ultimately, may enter the criminal justice system. This work ultimately enhances the life chances of children and young people and I believe, prevents them being involved with or a victim of crime later in life.”

Another area of the county is set to benefit from the crime prevention scheme known as the Safer Streets Project. 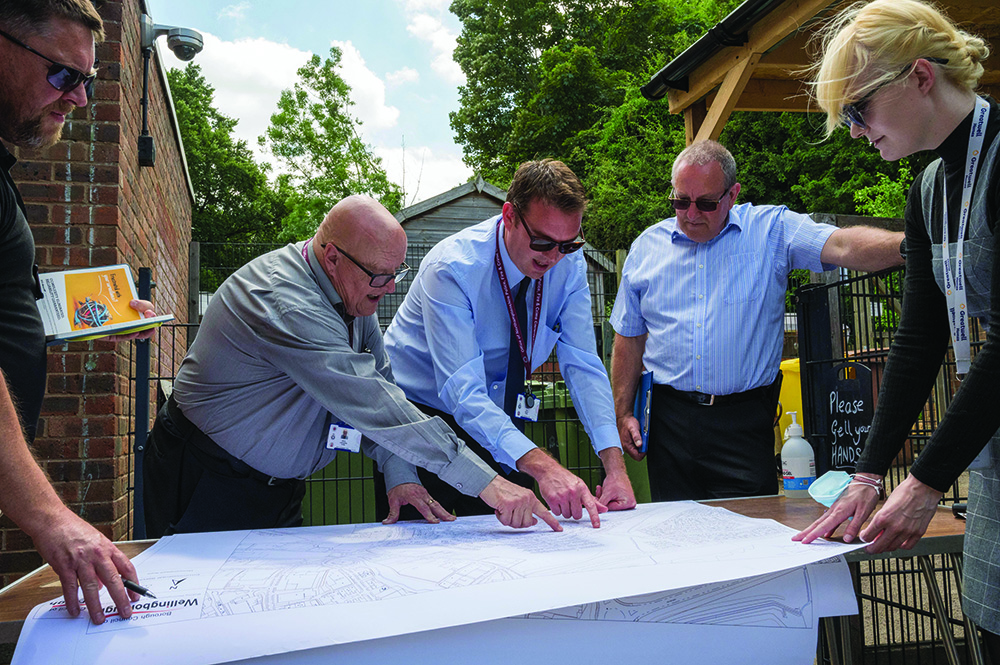 Northamptonshire Police, Fire and Crime Commissioner Stephen Mold bid for and was awarded £432,000 to fund a new crime fighting project on the Hemmingwell estate in Wellingborough.

This new project will get underway later this summer and will see the Commissioner’s office working with the local housing provider Greatwell Homes, to increase security on the estate through practical measures such as enhanced CCTV and new front doors to make properties less vulnerable.

These are measures that are proven to cut crime. PFCC Stephen Mold has said that he will add additional funding from his budget, as well as funding from partners North Northamptonshire Council and Greatwell Homes, to ensure that further enhancements to community safety on the Hemmingwell estate can be carried out.

Northamptonshire Police, Fire and Crime Commissioner Stephen Mold said: “I am thrilled that we have been successful, yet again, in securing additional funding. I know that these crime fighting measures have a lasting impact on people’s lives. I can’t wait to get started on the Hemmingwell estate.” 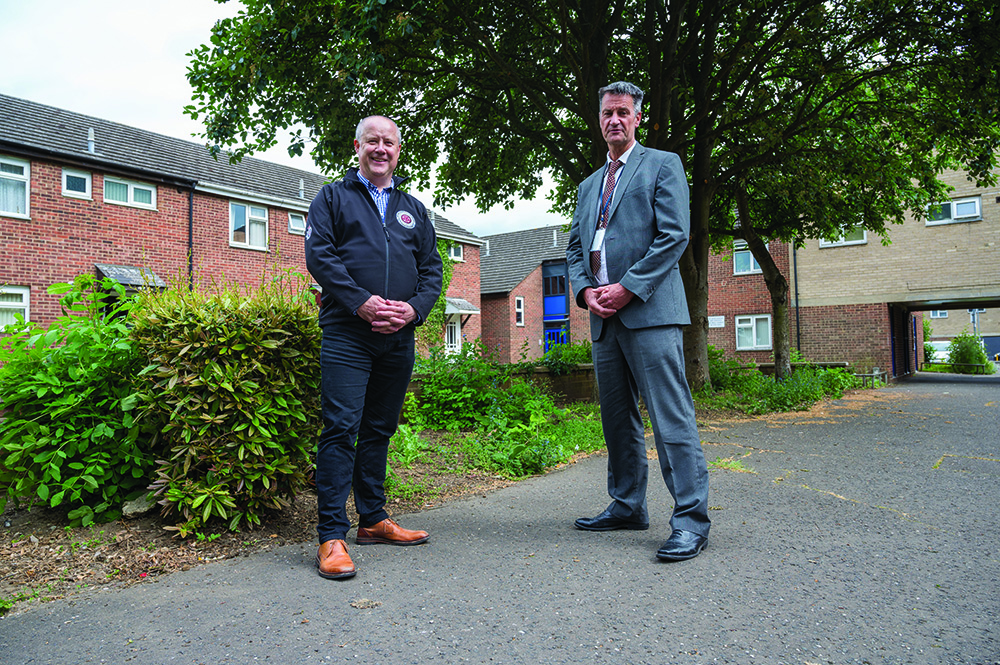 In addition, 250 properties have received new police approved secured by design front doors to deter burglars from entering homes and 50 cycle store cupboards have also been replaced in the Bouverie area.

Police, Fire and Crime Commissioner, Stephen Mold, said: “We are taking proactive measures to deter acquisitive crime in the most vulnerable areas. Burglary and theft can be incredibly distressing for the victims and leave a sense of vulnerability in what should be a safe place.”

Mike Kay, Chief Executive of Northampton Partnership Homes, said: “This funding has enabled us to tackle some of the issues that affect residents most.

“We have a great working relationship with The Police, Fire and Crime Commissioner and the success of this project demonstrates how much can be achieved in the community by developing strong local partnerships.”

Ten transferees have been welcomed to the Northamptonshire Fire & Rescue family by Police, Fire and Crime Commissioner Stephen Mold and Chief Fire Officer Darren Dovey. The transferees were funded by the PFCC and were in addition to 20 recruits that were needed earlier this year to replace outgoing staff. 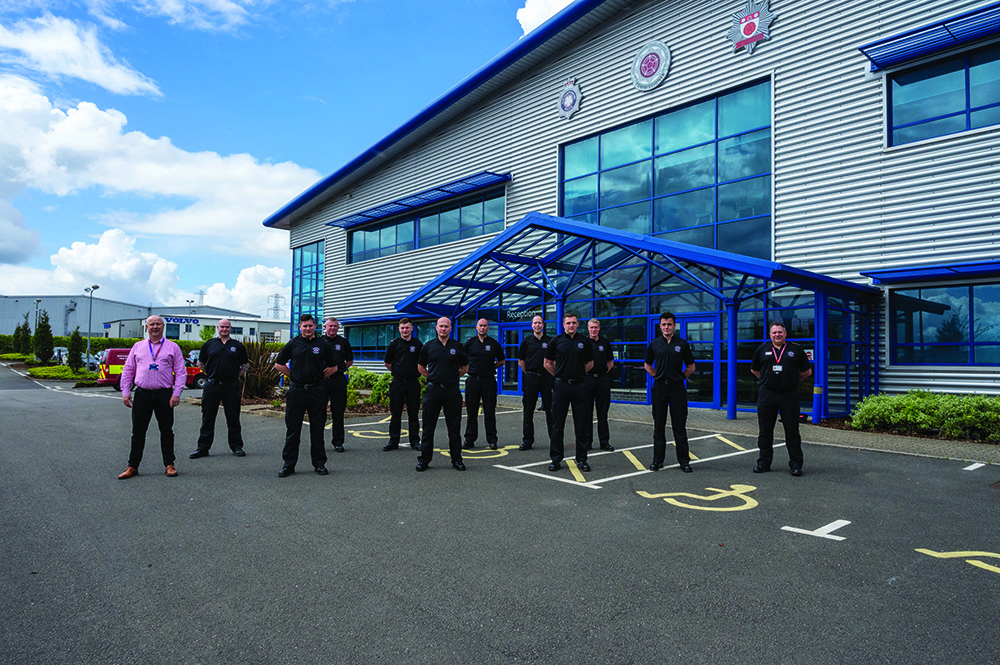 The ten firefighters will now be working out of Daventry and Rushden fire stations, having recently completed their intensive training at the fire training centre in Chelveston.

Of the ten starters, three had served as on-call firefighters in Northamptonshire but wanted to make the role full-time – while seven have moved from other services in the country. The move also offers an alternative job path for many of them, with previous careers of the new intake including spells working in logistics, the food industry and the Royal Air Force.

Laurence Jennings, 36, started as a wholetime firefighter at Rushden after previously being on-call in Oxfordshire. He said: “I have a background in corporate business and then I joined on-call and it helped me to realise that my aspiration was to do something different to the laptop and deskbound job. I absolutely loved being on-call and I decided to pursue it full-time.”

And Josh Gamble, 23, is joining Daventry Fire Station after a temporary spell as a wholetime firefighter in Staffordshire. He added: “I’ve wanted to be a firefighter for my whole life. When the opportunity arose, it was clear that Northamptonshire was a rapidly growing organisation that’s only going one way.”

For Chief Fire Officer Darren Dovey, the new intake represents an important boost to the resources that will be available to help keep the Northamptonshire community safe.

He said: “We’re delighted to welcome these new transferees. Some have come from on-call service into wholetime and some have come from other brigades – which is good for us because it shows we can attract new and talented people into the organisation.

“They will help Northamptonshire Fire and Rescue Service enhance both our response operations but also to help us deliver more prevention across the whole of the county in order for us to keep everyone as safe as we possibly can.”

The emergency throw lines have been installed in some of the county’s nature hotspots and in prominent locations on the Grand Union Canal near Blisworth Tunnel in Stoke Bruerne and by the reservoirs in Welford, Sulby, Naseby and Boddington. The throw lines are attached to large boards which give instructions on how to use them effectively.

Stephen Mold said: “There are some beautiful reservoirs in our county, and we want to ensure that our residents can enjoy them while they are out and about. This was a really great initiative and I was more than happy to make the funds available so that it could happen.”

Adrian Lole, area operations manager for the Canal & River Trust, added: “Our waterways are beautiful at this time of year and will provide an important escape for people as the weather improves and coronavirus restrictions are eased. The new throw lines are a valuable addition at some of our most popular sites.”