Northamptonshire Police, Fire and Crime Commissioner Stephen Mold has launched a new scheme that will provide help and support to keep people safe in the night time economy. 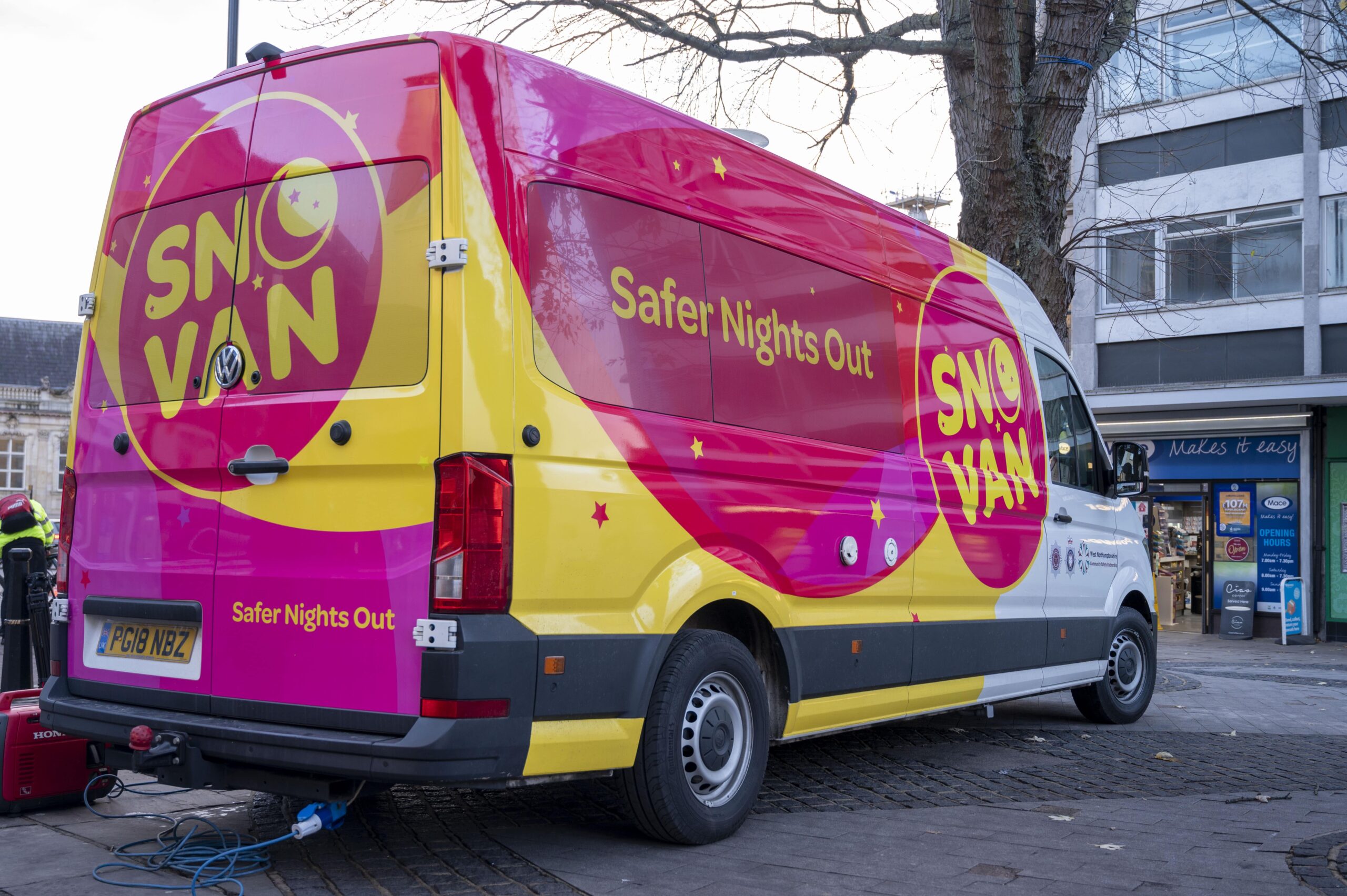 The SNOvan – or Safer Nights Out van – is a customised minibus that will be staffed by volunteers and will be in the centre of Northampton between 10pm and 5am every Friday and Saturday.

The SNOvan will be a haven for anyone who feels vulnerable or in need of help for any reason. The volunteers are all vetted, and they will be able to provide water and warmth, a phone charger, basic first aid or emotional support – whatever is needed to ensure that someone stays safe and can return home safely.

The volunteers, who include the Street Pastors and Northampton Guardians, as well as police officers on duty in the night time economy will be around the town centre on the lookout for people who may need the help of the SNOvan.

The SNOvan is part of a wider programme of work that the Northamptonshire Police, Fire and Crime Commissioner is carrying out with partners to make communities safer and reduce violence – with a particular focus on the safety of women and girls.

Over the coming months, work will begin on improvements such as better lighting and walking routes so people can enjoy a safe night out – whether an early evening stroll or a night on the town. There will be campaigns to raise awareness of unacceptable behaviour and enforcement activity will target the perpetrators of crime.

Both the Commissioner and West Northamptonshire Council have received funding from the Home Office – around £800,000 between them – to improve the safety of women and girls and night time safety more broadly. The SNOvan – Safer Nights Out van – is part of this wider programme of work to keep people safe.

Northamptonshire Police, Fire and Crime Commissioner Stephen Mold said: “Alongside enforcement to tackle potential offenders and raising awareness of simple safety measures, we recognised that there was a need to provide simple support to someone who finds themselves in need of help on a night out. We want to reduce the risk that someone will come to harm as well as helping create a calm and comfortable atmosphere in Northampton’s night time economy.

“The bus is predominantly for women but is there to help anyone. Whether someone has lost their phone, become separated from their friends, or simply finds themselves in difficulty, the SNOvan is there to help them stay safe.”

Stephen Mold has paid tribute to the hard work and lifesaving efforts of Northamptonshire’s firefighters – after helping to present awards at the annual Fire & Rescue Service Awards Ceremony.

The Police, Fire and Crime Commissioner attended the ceremony at the County Ground on November 12 to help recognise and honour both operational and backroom staff who go above and beyond the line of duty.

Chief Fire Officer Darren Dovey presented five commendations of his own – including recognising incredible work from both Red Watch at The Mounts and White Watch in Mereway in coming to the aid of distressed women and saving their lives.

There was also a Chief Commendation for Shaun Johnson, who recently retired from the Arson Task Force and was part of both the police and fire family.

Stephen Mold said: “Being able to recognise people who go above and beyond is one of the best things I get to do as the Commissioner.

“It is important to me that we value the contribution that everyone makes to Northamptonshire Fire and Rescue Service and the safety of people in this county, whatever their role.”

Stephen said the report, which was published in the last week of November, confirms that Northamptonshire Police has improved in key areas since the last inspection and is on the right path with plans in place to keep improving.

Mr Mold said: “The Inspectors’ report commends the progress that the Force has made in investigating crime and it is now better able to respond to calls and identify vulnerable people – these are all areas that matter to me and people tell me matter most to them.

“The progress has been made against the backdrop of the pandemic, and I am grateful to all the police officers and staff who have worked hard to provide a better service for the public. I know that like me, they are committed to making the further improvements that must be made.

“Thanks to the support of local taxpayers, we have made significant investment in policing in Northamptonshire – there are more police officers, who are better equipped, and the Chief Constable and his team have shown leadership and drive.

“The Force is heading in the right direction but there is still much work to do. I am content that clear plans are in place and I will expect Northamptonshire Police to build on these foundations to make the improvements that we all need to see.”

Young community ambassadors get hands on with officer training

Three young ‘community ambassadors’ from minority communities across the county had the chance to talk to police officers and learn more about the skills and techniques they use in their work as part of a pilot scheme to shine a light on policing and help build trust and confidence. 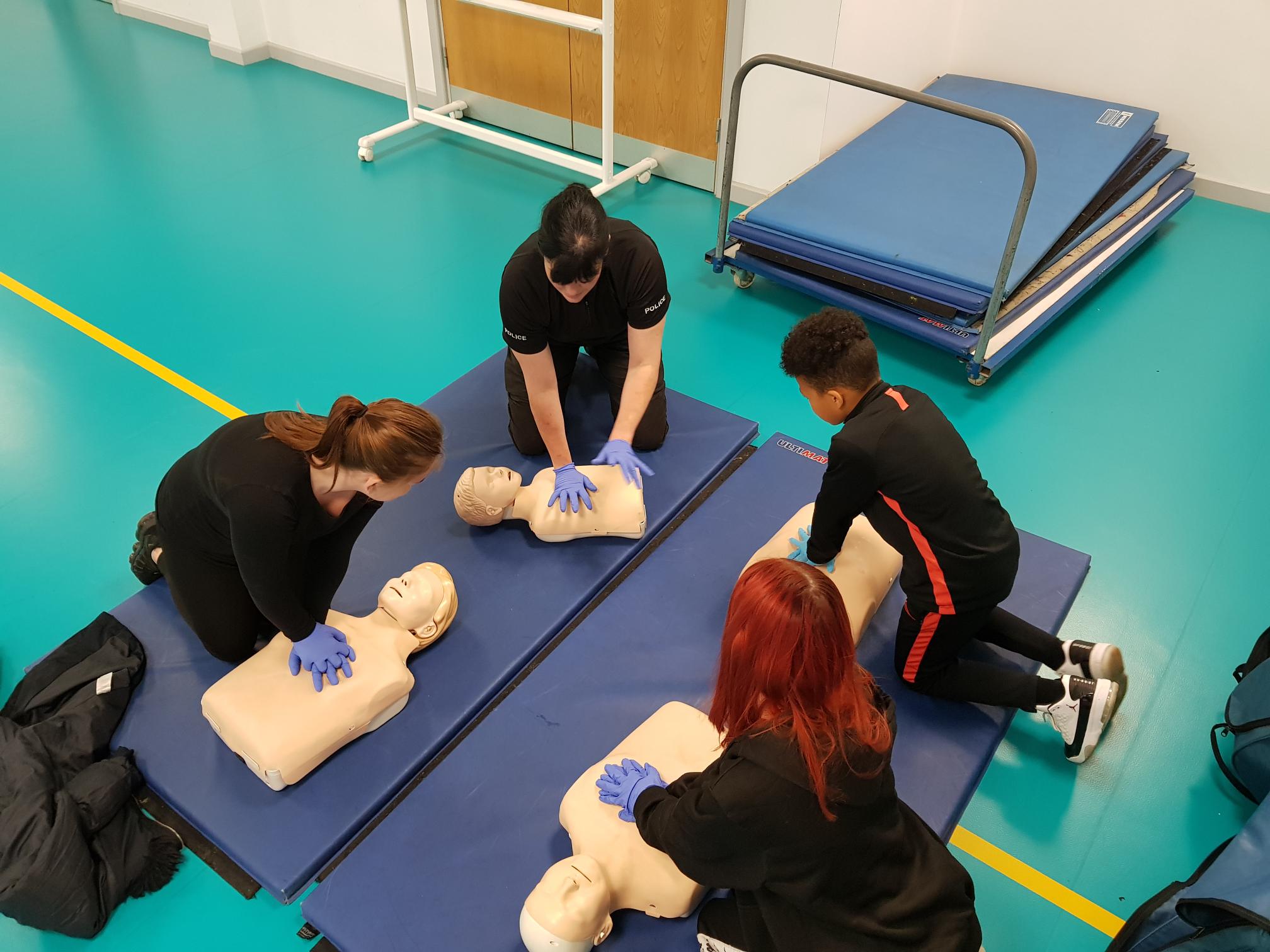 Chief Inspector James Willis introduced the scheme. He said: “The aim is to get young people involved to show them what we do and why we do it. The hope is they will take something positive and share their experience with their peers, helping to dispel some of the myths around policing.”

Zeeshan Khan, Targeted Youth Services Manager for the Police, Fire and Crime Commissioner, accompanied the visitors, who were able to meet police trainers and experience some of the training themselves.

Zeeshan said: “The practical first aid was rewarding for them, as they were able to learn new skills. As well as a session on resuscitation, they learned about how trauma wounds are dealt with and treated.

“The trainers also explained the decision-making process officers go through when dealing with operational situations, such as whether to conduct a stop and search or make an arrest.

“As well as being educational, the day gave a different perspective of the police, which challenged the young people’s stereotypes. “They had the opportunity to talk with officers in a positive setting and find out what they are trained to do and, importantly, why.

“Police colleagues were also able to learn from the young people, in particular how they felt about language, how it’s used and how it could be perceived by the wider community.”

Thanks to everyone who responded to the Commissioner’s consultation on the priorities proposed for his new Police, Fire and Crime Plan to cover the next five years.

The consultation showed overwhelming support for the five priorities: Prevention that keeps the county safe; effective and efficient response; protect and support those who are vulnerable; modern services that are fit for the future; effective justice.

The Plan will now go to the county’s Police, Fire and Crime Panel on December 16 and subject to their feedback, will be published. If you missed the consultation, you can find the plan on the Commissioner’s website www.northantspfcc.org.uk

The funding supports projects that are in line with the priorities outlined in the Commissioner’s current Police and Crime Plan and focus on diverting young people away from crime and criminal activity and keeping the county safe.

In addition, eight parish councils and schools received grants totalling almost £31,000 from the Commissioner’s Road Safety Fund, to carry out work to reduce the number of people killed or seriously injured on the county’s roads.

These latest grants mean that since 2017 the Commissioner has awarded more than £458,000 of funding to 84 community groups across Northamptonshire.

Stephen Mold said: “I set up the funds to help support organisations that can clearly demonstrate how they are contributing to the safety of the county and that support my priorities as outlined in the current Police and Crime Plan.

“Diverting young people from becoming victims of crime or offenders of the future is important to me and the organisations that I am supporting play a key role in building a legacy of reduced crime and anti-social behaviour.

“I strongly believe that working with these grassroots organisations that are advocating and driving positive change will help us deliver our vision for a safer county for all.”

The latest recipients of the Making Northamptonshire Safer Fund:

CSD Activity Camps received £9,993.30 to help fund activity
sessions for schools and colleges on the Kingswood Estate in Corby

Frank Bruno Foundation was awarded £4,250.00 towards the running costs of a youth fitness programme across the county

Goodwill Solutions received £7,579.50 to provide employment support for young ex- offenders, in and around Kettering

Northamptonshire Search and Rescue received £8,272.20 to improve the specification of their new technical rescue vehicle

Linwood Community Cooperative was awarded a grant of £10,000.00 to extend their outreach programme in Corby

Budget consultation on the way

The consultation on the Police, Fire and Crime Commissioner’s budget proposals for 2022/23 will begin shortly before Christmas when the Government’s financial settlements for police and fire are announced.

The Commissioner charges a precept that goes towards funding Northamptonshire’s police and fire services, that’s currently around 18% of the total council tax you pay.

Please keep looking online and on social media and have your say on the consultation.