Hundreds of residents in a Wellingborough estate have now received free home security products thanks to a scheme being run by the Police, Fire and Crime Commissioner. 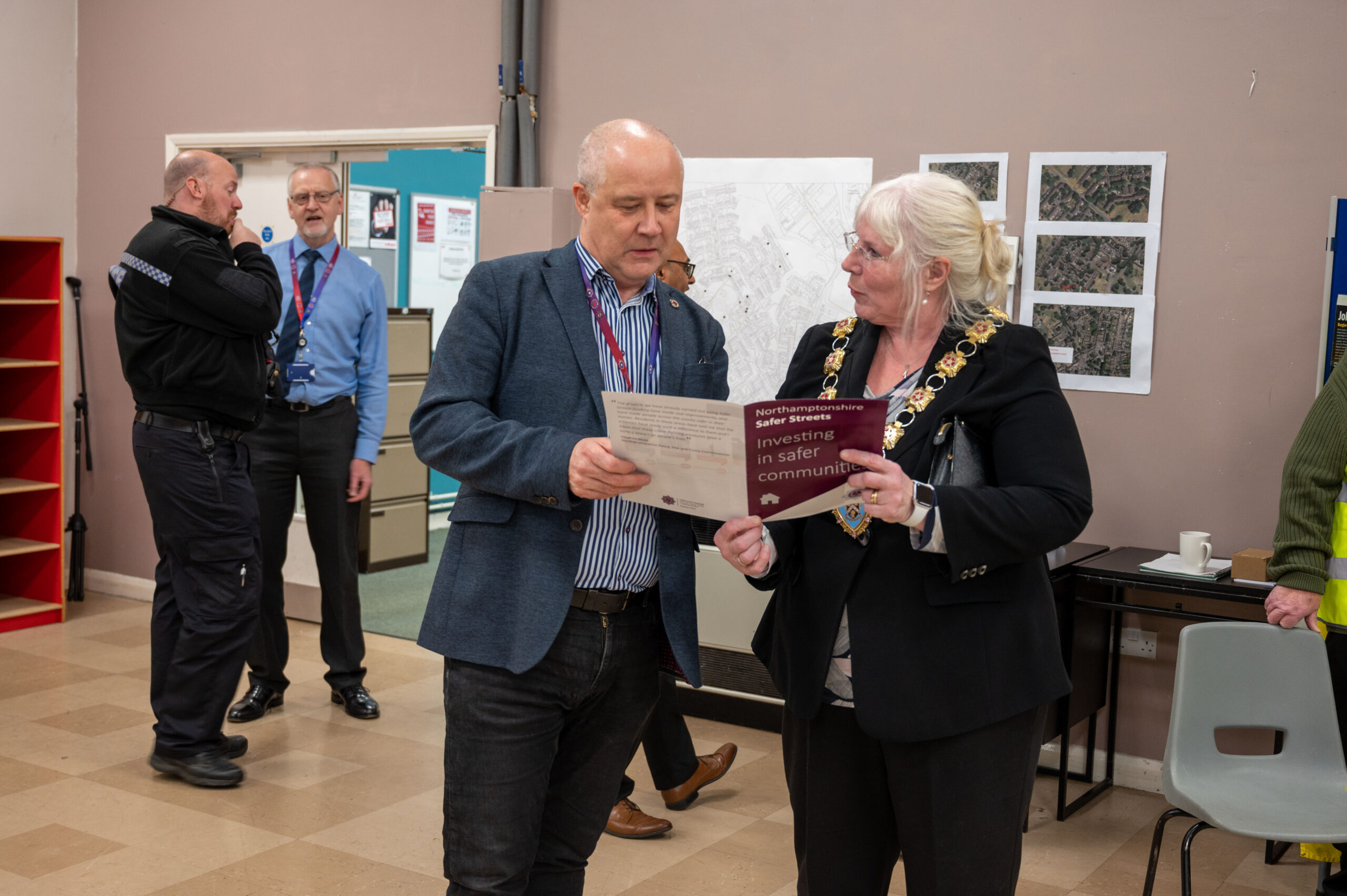 The Safer Streets scheme is investing £432,000 to fight crime in Hemmingwell after a successful bid for Home Office funding by Police, Fire and Crime Commissioner Stephen Mold.

And the Police, Fire and Crime Commissioner was present at the latest event at Hemmingwell Community Centre on November 2, where he chatted with members of the public about the scheme and explained how previous Safer Streets projects have had a positive impact on residents across the county.

As well as funding the free home security products, the scheme will fit new doors at 550 homes owned by Greatwell Homes in Gannet Lane and Fulmar Lane to enhance safety, with doors set to be fitted over the next few months.

The PFCC is also working alongside North Northamptonshire Council to extend CCTV coverage on the estate, with additional cameras set be installed in the New Year.

Hemmingwell is the latest community in the county to benefit from Safer Streets funding: Kettering All Saints area, Wellingborough town centre area and Northampton’s Bouverie and Portland Place estates were all successful schemes in the last round, sharing £1.4 million that was spent on physical safety improvements such as CCTV and alley gates.

This means that the county will have benefited from almost £2 million of additional funding for crime prevention over the last 18 months.

Hemmingwell residents have attended three community evenings so far, with one more to come on December 2. They have also had the chance to speak with project partners, as well as other key community stakeholders such as Northants Police, Northamptonshire Fire & Rescue Service, Crimestoppers and Northampton Town FC Community Trust.

Stephen Mold said: “It was fantastic to be able to head along to Hemmingwell and meet with residents to explain how we are investing in their neighbourhood and making it a safer place to live. We have already seen the lasting impact on residents’ quality of life that our previous Safer Streets projects have had, and we’re looking forward to seeing the positive difference this will make in Hemmingwell.”

An initiative born from an idea between Police, Fire and Crime Commissioner Stephen Mold and Northampton’s Business Improvement District (BID) has been launched to enhance relationships between local businesses and the police. 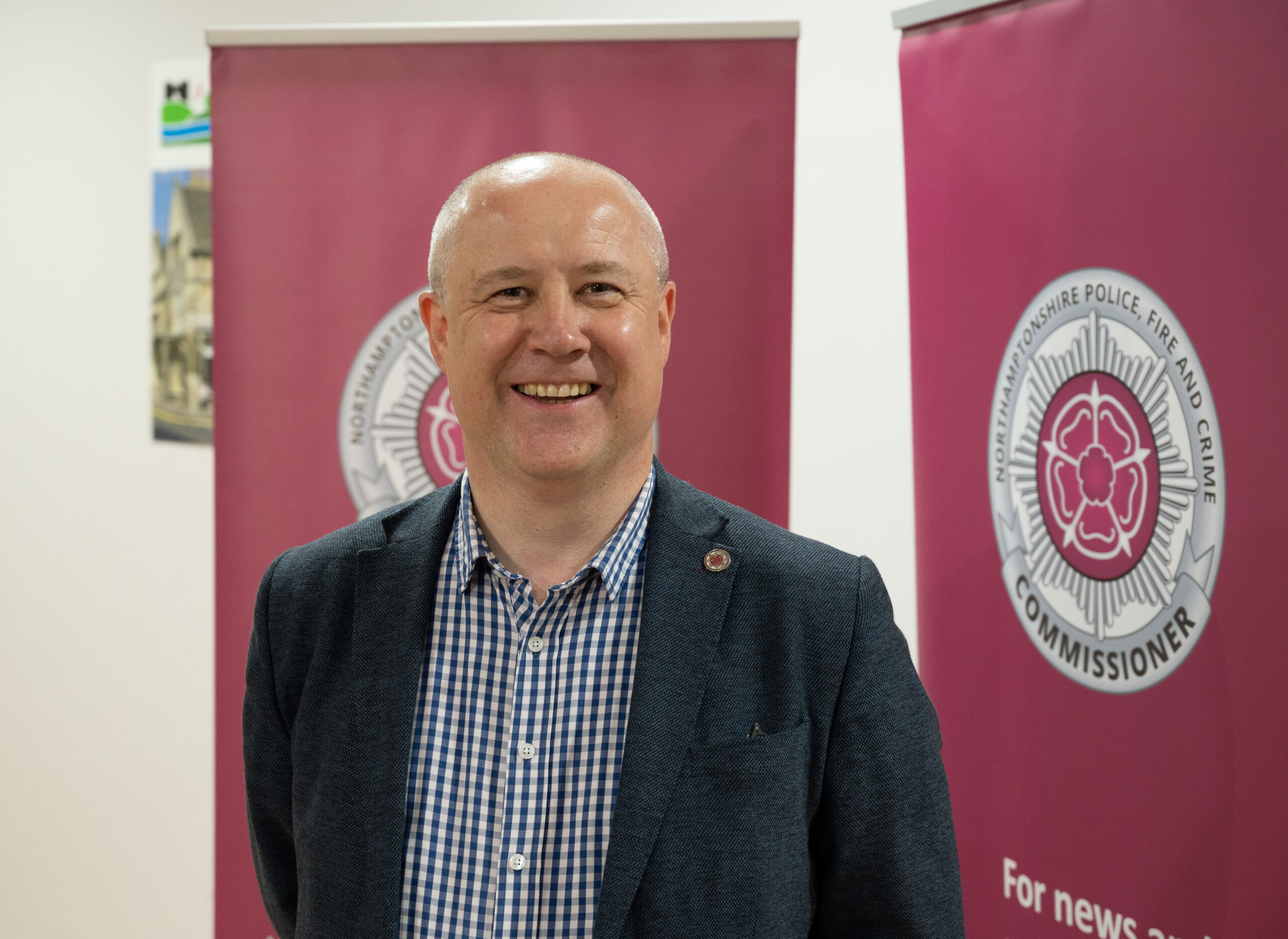 Town centre businesses in Northampton will be given the name and number of an officer from the Northampton Neighbourhood Team, who will be their point of contact should they want to speak about any issues they have on their premises.

Inspector Andy Blaize said: “Local shop keepers and members of the Northampton BID told me they wanted better lines of communication with us. As a result, we will be rolling out a new initiative where a nominated police officer or PCSO will be the main point of contact for those town centre shops that want to sign up to the scheme.”

Beth Curlett, the new Inspector for Northampton town centre will be taking the lead on this initiative. Insp Curlett said: “We have a really dedicated team of officers who are keen to work with local businesses and I hope this commitment to local policing in the town centre will make a difference to not only our shops but also visitors to the town centre.”

PFCC Stephen Mold said: “The initiative gives business owners the confidence that a designated officer is there to support them with anything that isn’t a police emergency, such as crime prevention advice and to discuss any emerging issues in the town. By working together, we can make the town centre a safe place to trade, live and visit.”

The Commissioner’s Youth Engagement Team has been working with Northamptonshire Emergency Services Cadets and Northamptonshire Fire and Rescue Service (NFRS) to deliver a scheme to help young people develop resilience when dealing with challenging situations. 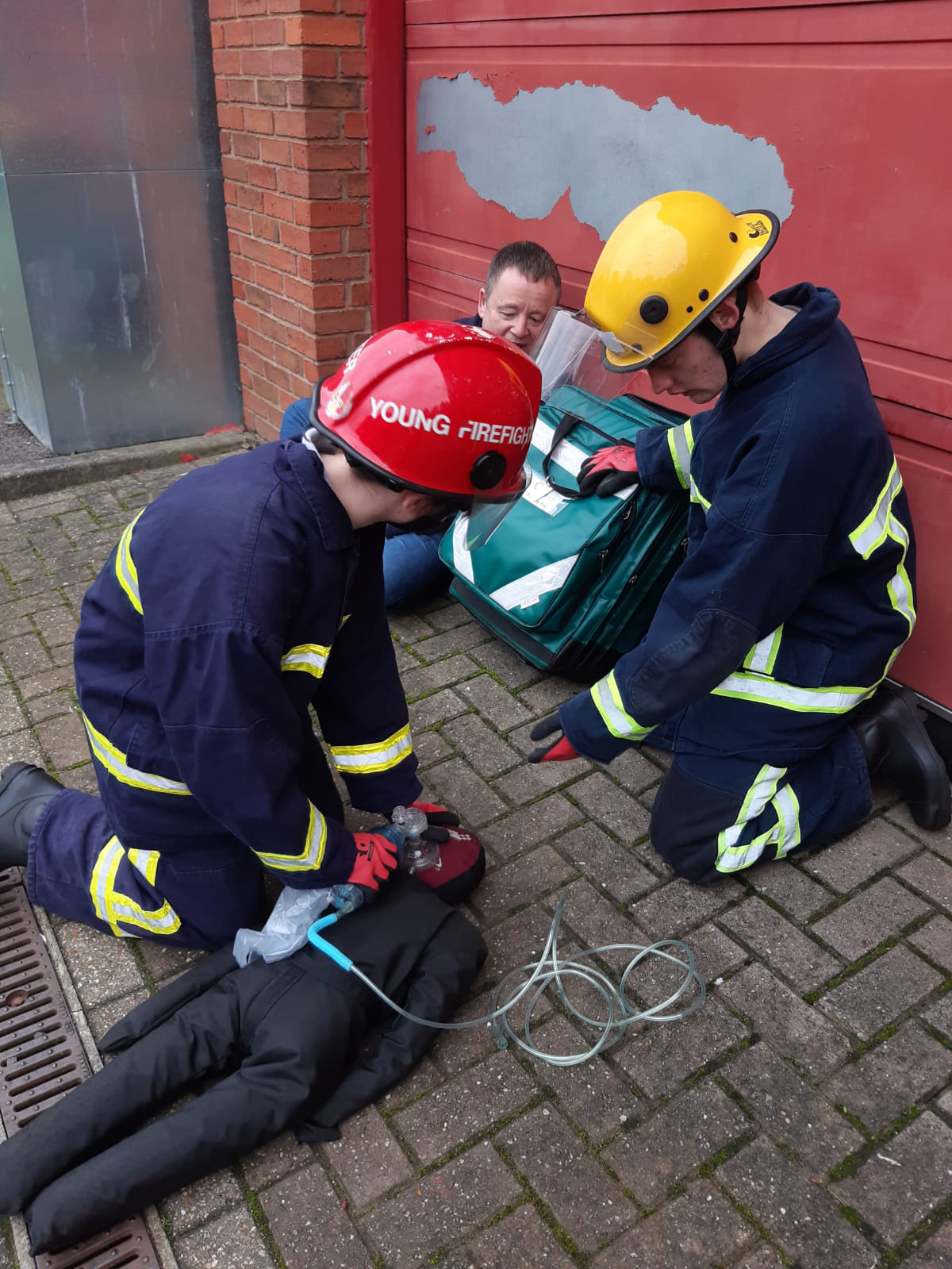 Together, the three organisations developed an Early Intervention scheme, which ran as a pilot over two days in October. Twelve Emergency Services Cadets from across the county took part in a programme of theoretical learning and real-life scenario activities, with the aim of developing their life skills and experience when faced with difficult situations.

The content included problem solving, communication skills, teamwork and working under pressure. The Cadets applied the theory they had learnt to different fire-related scenarios, one being a kitchen fire and another a road traffic collision.

Stephen Mold said: “Early intervention and prevention really are key priorities for me, and I am delighted that partners are working together to support young people in this way.

“These sessions are critical in preventing problems in later life, such as poor mental health, low educational attainment, reduced involvement in crime or anti-social behaviour.”

The National Fire Chief’s Council is developing a toolkit of material that can be used at future sessions and the plan is to open the Early Intervention Programme to a wider audience early next year, reaching young people in youth groups and schools across the county.

For the first time, Police, Fire and Crime Commissioner Stephen Mold has brought priorities together into one overarching plan aimed at making Northamptonshire a safer place.

Stephen said: “It is clearer to me than ever before that the problems that affect Northamptonshire will never be solved by any one organisation.

“I want Northamptonshire Police and Northamptonshire Fire and Rescue Service to collaborate wherever it makes sense to do so, out in our communities, to make this county as safe as it can be.

“For the first time, this is a plan for police and fire, reflecting my responsibility to set the strategic direction for both services in Northamptonshire. It is not an exhaustive list of all the activity that will happen, but it is intended to set the key priorities for both organisations.”

The priorities proposed are:

Several objectives are set out under each of these priorities for the Chief Constable and Chief Fire Officer to deliver jointly and with partners.

If you are reading this before 11.59pm on Sunday 7 November, there is still time to take part in the survey and the full version of the draft Police, Fire and Crime Plan can be found here: www.northantspfcc.org.uk/police-fire-crime-plan-2021/

Northamptonshire Fire and Rescue Service is asking landlords who own or manage Houses in Multiple Occupation (HMOs) to get involved in a pilot scheme that will help improve safety in the private rented sector – and extend the skills and capacity of firefighters in the important areas of fire protection and prevention. 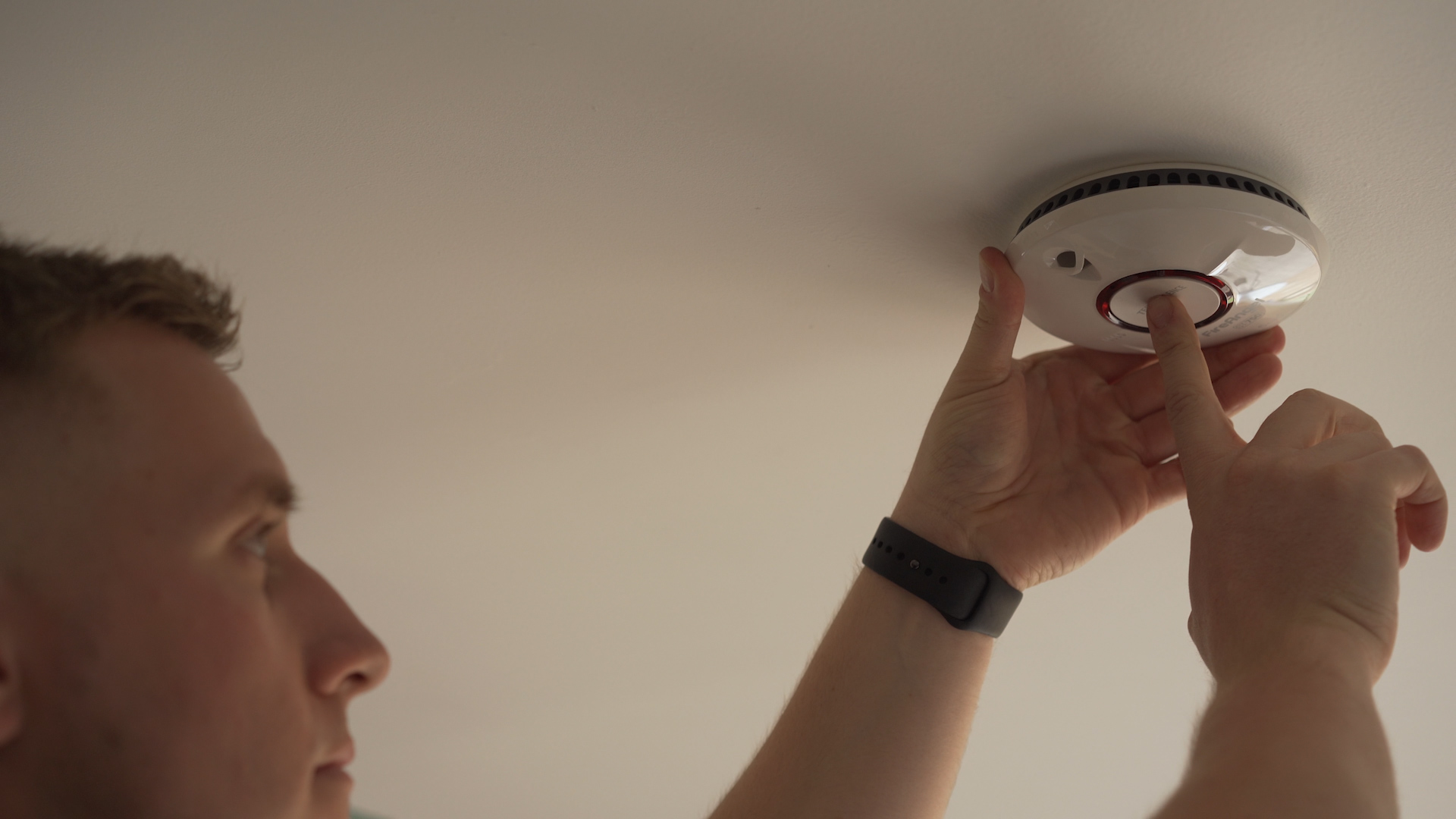 Now landlords renting out HMOs from right across the county are being invited to have their fire protection arrangements checked – completely free of charge – by Northamptonshire Fire and Rescue Service.  Crews will also be able to talk to tenants in the property about fire prevention and safety in the rooms they rent. The Fire Service have regulatory powers that apply only to the common and shared areas of HMOs such as kitchens but are happy to advise on safety throughout a property.

Scott Richards, Head of Protection at Northamptonshire Fire and Rescue Service, said: “Our Fire Protection Officers work with landlords to provide informal assistance and information to make sure that they understand how to make Houses in Multiple Occupation as safe as they need to be.

“Northamptonshire Fire and Rescue Service has provided home safety advice to the residents of thousands of homes for many years.  I hope that landlords will recognise the benefits of having a quick, free safety check to identify possible issues that can be quickly fixed and suggest ways to reduce a risk of a fire happening.”

Police officers and firefighters are working together to put Rushden first in a fine example of collaborative working. 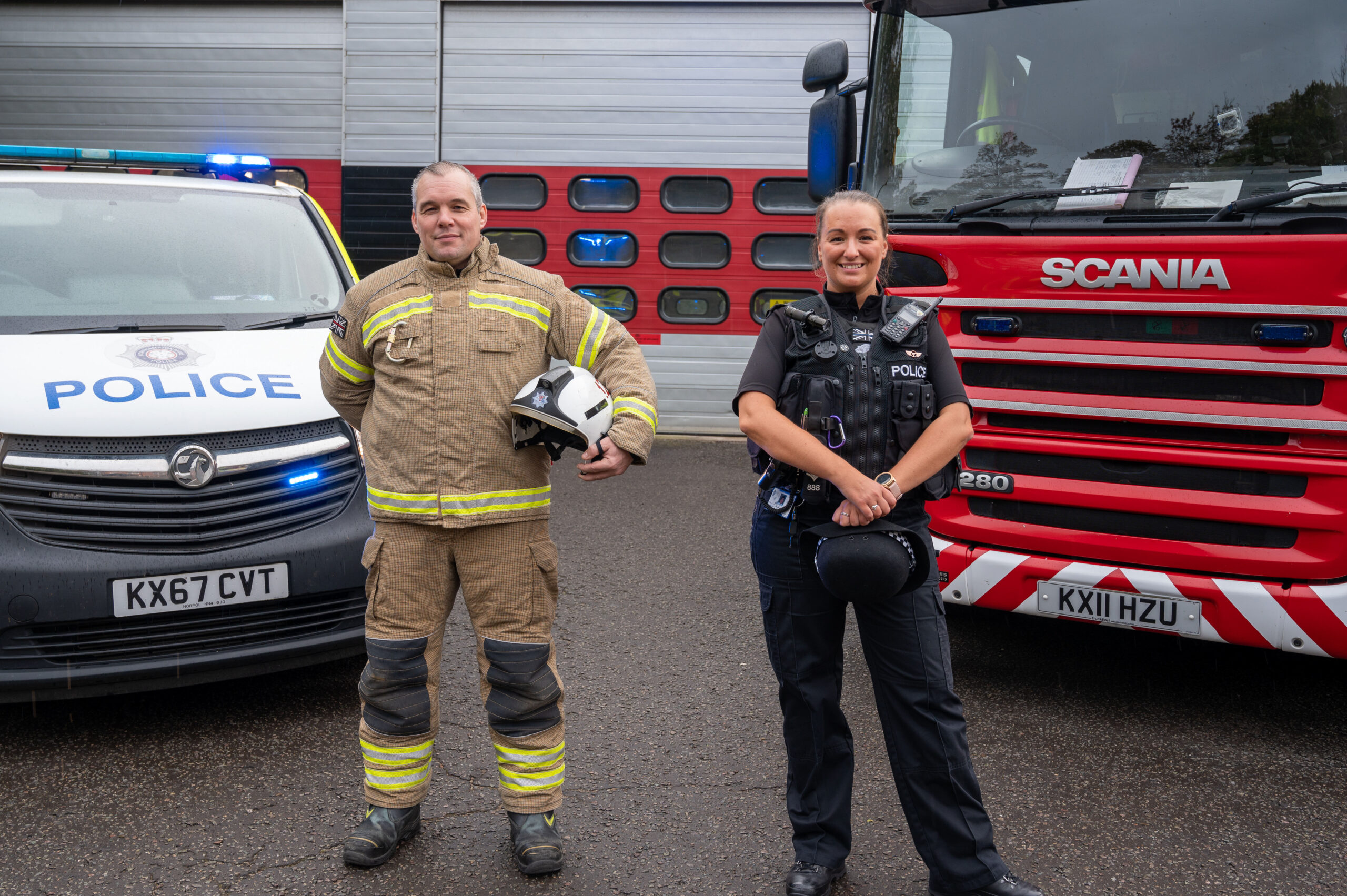 Rushden Fire Station can be highlighted countywide as an example of best practice with the fire crew working hand-in-hand with the town’s Neighbourhood Policing team.

Leigh Françoise Goodwin, Neighbourhood Policing Sergeant, and Fire Station Manager Craig Douglas have worked hard together to build a healthy relationship that sees the two teams complement each other’s work in the community. The 20 police officers will often attend incidents and community events with the 14 wholetime and 15 on-call firefighters.

“There were massive grey areas to start with,” said Craig Douglas. “But we made the conscious decision to sit down and work out how we could work together to get the best outcome for the community. That required the buy-in from my fire crew to support the police with their initiatives.”

The two teams have already worked together in combining police attending incidents and working out if there were opportunities for the Rushden crew to carry out home fire safety checks. And later this month they will hold a joint event at Rushden Lakes on November 26 demonstrating the dangers of drink driving and demonstrating how fire crews will rescue trapped passengers.

Sergeant Leigh Françoise Goodwin said: “Since the police station closed in Rushden people thought we weren’t in the town anymore, but we are. A lot of people still don’t know that we work out of the fire station, but we’re slowly breaking down barriers and the public are learning to trust both emergency services because they can see we’re actively supporting them together.”

SM Douglas added: “There’s a trajectory towards joint working and we’ve had members of the public comment how good it is to see police and fire walking around together. We’re still very clear on our separate roles and responsibilities, but we’ve found a way to help facilitate all our needs whilst remaining community focused.”

Police, Fire and Crime Commissioner, Stephen Mold, added: “It’s fantastic to see both fire and police working collaboratively in Rushden. This year I have put together my first ever Police, Fire and Crime Plan, and that’s because I firmly believe that the best way to make this county safer is for our emergency services to work together.”

As a new wave of students head to university for the first time, Northamptonshire Fire and Rescue Service (NFRS) have been visiting the county’s new residents as they settle into their halls of residence accommodation.

Over four evenings in October, Prevention and Protection Officers from NFRS met with students living in halls to discuss fire safety and offer advice to help reduce the likelihood of fires starting in these premises.

These ‘kitchen fire talks’ were incredibly well received by the students with 858 attending one of the four sessions.

For many students this might be the first time they will be cooking for themselves and with all the distractions that go alongside student life, it is important they know how to be safe in the kitchen.