Bobbies back on the beat

A major new focus on local policing in Northamptonshire will more than double the number of neighbourhood police constables. 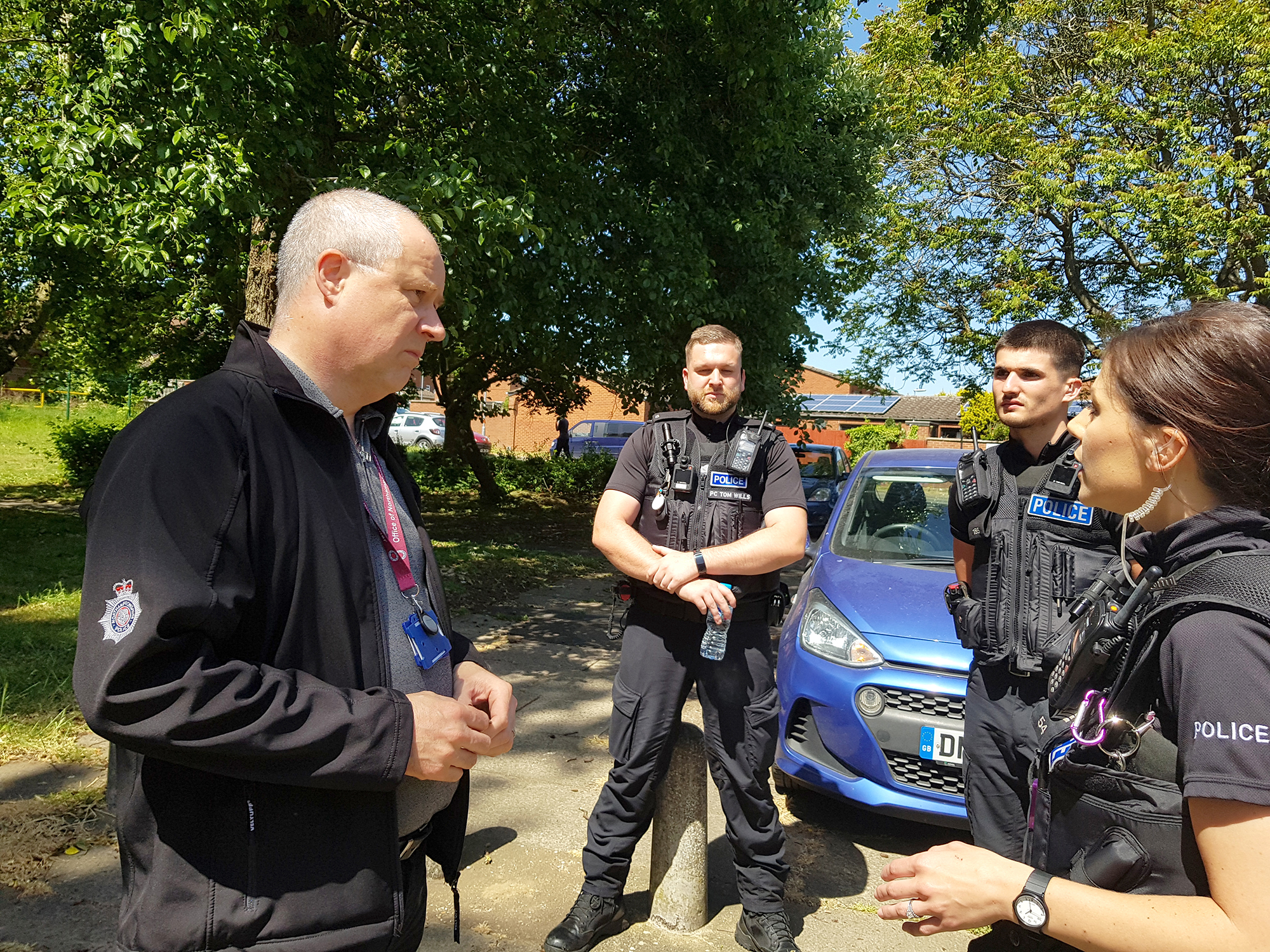 Police officers in neighbourhood teams across rural and urban communities will be doubled, growing from 50 to 100 over the next 18 months, with an aim to add a further 60 in coming years. These will be additional officers to add to the neighbourhood police and PCSOs already working across the county.

Neighbourhood policing will now be at the heart of our fight against crime, with visible, locally accountable policing to tackle the problems that matter to people.

This new focus has been made possible by the increased number of police officers in the Force. Northamptonshire Police now has 1367 police officers compared with 1170 four years ago. This means that we can now strengthen our neighbourhood teams without taking resources from emergency response or other specialist areas of crime fighting.

Northamptonshire Police, Fire and Crime Commissioner Stephen Mold said: “I know how much value people place on knowing that they have a local, neighbourhood policing team dedicated to tackling problems in their area.

“As our plans develop, we will make sure that every neighbourhood has a dedicated, named local team dealing with the issues that matter to them at the earliest opportunity.”

We are also investing in two mobile police stations to give more visible and accessible local policing in our more remote and rural communities.

Paying for police and fire service next year

Northamptonshire Police, Fire and Crime Commissioner Stephen Mold is asking for increases in police and fire precepts to ensure both emergency services continue their progress into 2021/22.

The precepts, which together make up just 17% of residents’ council tax bills, help fund both the police and fire budgets – and more than half of 2,500 people who responded to a consultation supported the proposals to increase both precepts.

After much lobbying, the Commissioner has managed to secure an additional £2 million in funding from the Home Office to help secure the Fire and Rescue Service’s financial stability. Half of that sum will be saved as a necessary reserve.

The extra cash injection means that the tax precept will now only increase by £1.23 a year for band D households, compared to the £5 increase that was previously proposed.

“This money is a one off grant, and while it doesn’t give us the certainty for future years that we are looking to achieve, it does mean that we don’t need to slow down on our plan and that we can push ahead, without asking local taxpayers to pay more than we have to.”

The police precept meanwhile will increase by five per cent – an extra £13 a year for a band D household – but is a smaller rise than was legally allowed. It will bring in an extra £3.15m for policing in the county in the next financial year, taking the total budget to £153.5m.

Since 2017, the budget given to the police by the Commissioner has increased by 31% and there are 200 extra police officers. The precept increase will allow the recruitment of a further 130 officers over the next two years, which will make the Force the largest it has ever been.

Stephen Mold added: “I have to balance the need to keep the public safe and to ensure the police have sufficient money to do their job with the ability of the public to pay. We have made important investments that have strengthened policing in Northamptonshire over the last four years to give a better service and keep our community safe. A 5% increase will enable us to tackle the issues that the public have asked us to address and to put more police officers on the streets.”

Fire crews step up in support

Firefighters and fire staff have played a huge part in helping colleagues in the emergency services – by becoming ambulance drivers.

Twenty-two Northamptonshire Fire & Rescue Service personnel have been trained by East Midlands Ambulance Service (EMAS) to carry out support tasks such as driving urgent care vehicles and the safe moving and handling of patients.

The firefighters and fire support staff volunteered to provide this support, and are properly protected with the same personal protective equipment and the same infection control measures and access to vaccines as their EMAS colleagues.

Up to four staff each weekday are working at Northamptonshire ambulance stations, and of the 22 firefighters and staff trained, 14 have been carrying out regular shifts at least once and up to three times a week.

One of those is Craig Smith [pictured], a facilities technician with the fire service. After completing a two-day intensive training course, Craig has now managed eight shifts behind the wheel of an ambulance.

He said: “I wanted to do something for my community and if I can help in any way I will, because our colleagues at EMAS really deserve the support. I’m really proud to be doing this and representing the fire service as well.”

Craig, aged 46, is fitting in his extra shifts with EMAS while training to undertake a mammoth mountain climbing challenge in September in
aid of The Fire Fighters Charity.

Having had to postpone his initial plan to climb Kilimanjaro, Craig has brought a team of 10 together to climb even further – by scaling the UK and Ireland’s six highest peaks in a four-day period. You can contribute to his fundraising efforts by visiting www.5Plus1PeaksChallenge.co.uk

Northamptonshire Fire & Rescue Service has won praise for its ‘positive contribution’ to the community during the coronavirus pandemic.

The service has supported other agencies in a tough year by helping to drive ambulances, deliver food and medicine, check on care homes and homeless people, and transfer the deceased from hospitals to the temporary body storage facility at Wollaston.

In August 2020, the Home Secretary asked HMICFRS to inspect how Fire & Rescue Services in England were responding to the pandemic. And in a recent letter to the Chief Fire Officer Darren Dovey, announcing her findings, Inspector Zoe Billingham said: “I am very grateful to your service for the positive contribution you have made to your community during the pandemic.”

The report shows how NFRS has managed to balance its COVID response while maintaining its core role of responding to calls from the public and attending emergencies.

Mr Dovey said: “I’m pleased that this report recognises that the service has worked hard and been willing to do whatever is necessary to keep the county moving and fight against the pandemic. “Firefighters and staff have gone the extra mile to look after the vulnerable and to protect lives in Northamptonshire.”

And Stephen Mold, the Police, Fire and Crime Commissioner, added: “I don’t underestimate the pressure that comes with continuing the day job while taking on roles to support other organisations and I thank everyone for the way they have got on with the task in hand.

“I’m glad that the report also notes how well fire and police have worked together in response to the pandemic, and that has laid the foundations for even closer working in the future.”

New smoke hoods that are now on every fire engine in the county have already proven a great investment. 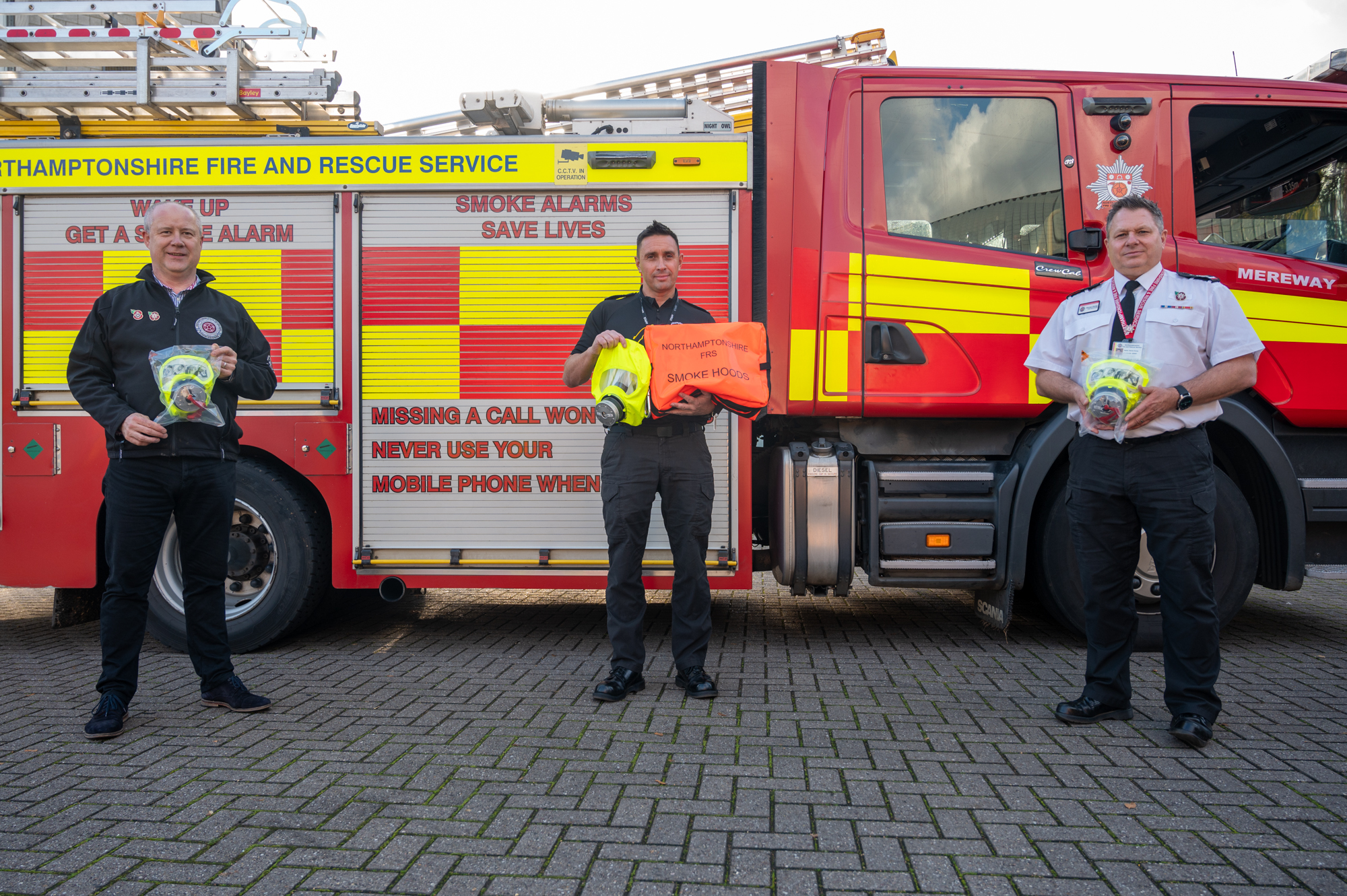 The hoods offer a one-time use for 15 minutes of protection from breathing in toxic fumes during a blaze.

They were first deployed by firefighters from the Mounts, Moulton and Brixworth who attended a first floor fire at a block of flats in Oakley Street, Northampton in the early hours of January 22.

Station Commander Richie Stevens, of Northamptonshire Fire and Rescue Service (NFRS), said:  “The building was filled with very thick smoke and if we had not had the smoke hoods, there is a good chance that the man and woman we rescued would have needed medical attention. They were so simple to fit and very effective.”