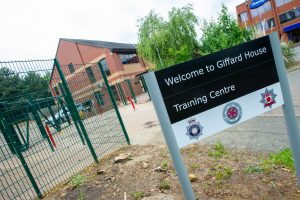 Mr Ellis was joined by Police, Fire and Crime Commissioner Stephen Mold and Paul Bullen, Director of Enabling Services, to mark the opening of the new facility in Pyramid Close.

Mr Mold purchased Giffard House last year and the interior of the building has since undergone a complete refurbishment. It has now been transformed into a modern and professional, bespoke police training facility that will enable the Force to deliver a range of training to new recruits and existing officers and staff alike.

The new facility is an important investment for policing in the county and will add much needed capacity that will support the Force’s drive to recruit hundreds more police officers. It replaces two small modular buildings in the driveway at Wootton Hall that were earmarked for replacement more than 10 years ago.

Northamptonshire Police, Fire and Crime Commissioner Stephen Mold said: “Northamptonshire Police is growing by almost 200 police officers over the next few years and those new recruits need to be trained to the highest standards. The investment in a new training hub was vital to create a professional learning environment that I believe now is one of the best in the region.

“But at its heart, this is not an investment in a building, it is an investment in the future of the Force that will shape the next generation of Northamptonshire Police officers and ensure they have the skills and abilities they need to keep the county safe.”

Last year, the Chief Constable and Police, Fire and Crime Commissioner announced the decision to increase police officer numbers to more than 1,300 for the first time since 2010. The number currently stands at 1328, which means Northamptonshire now has 160 more officers than four years ago.

The government’s plans to increase the number of officers across the UK will see a further increase in police officer numbers in the county, taking the Force to 1,500 officers by 2023.

The huge recruitment drive continues. Nearly 190 officers have started their training in the past 12 months and since April 2020 the Force has received more than 600 applications for its police officer vacancies, more than any other force in the East Midlands region.

Nick Adderley, Chief Constable of Northamptonshire Police, said: “The Force’s recruitment of new police officers is continuing at pace and it is hugely important they not only get the best possible training but also receive that training in a comfortable, professional, fully equipped and fit-for-purpose environment.

“I want Northamptonshire Police to be an employer of choice for anyone wanting to begin or further their career within the police service. The new facility is bright and welcoming and has been designed specifically with the learning and development needs of both new recruits and existing officers and staff in mind.

“Giffard House is an important addition to the Force estate and will ensure we are able to continue to provide effective, professional and quality training in a much-improved and dedicated learning environment for many years to come.”

The total cost of the building and refurbishment was £3.2 million.

The first floor of the two-storey building is home to a suite of training rooms – three core and two crime classrooms, two interview rooms, two monitoring rooms, two IT classrooms and office space for the training team.

The large ground floor has provided the ideal space for a dedicated officer safety and fitness training hall, with new changing facilities and a refreshment and welfare area completing the ground floor layout.

Anyone who is interested in becoming a police officer with Northamptonshire Police can find out more at www.northants.police.uk/policeofficer