More than 1,000 children from more than 700 county families in difficulty have received support thanks to a specialist team set up by Northamptonshire Police, Fire and Crime Commissioner Stephen Mold. 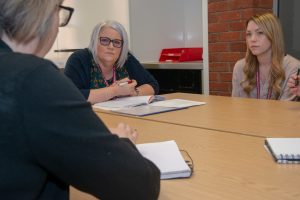 The Police, Fire and Crime Commissioner set up an Early Intervention Team one year ago and since then, the team of eight practitioners have worked with 764 families with 1,115 children.

The needs of these families and children were not yet serious enough to meet the threshold for Children’s Services Team involvement and so without the PFCC’s Early Intervention Team, they would not have received any form of support.

The Team is made up of a group of specialists who work with young people or families who are experiencing difficulties such as domestic violence, addiction or potential exclusion from school. Many of the families are referred to the Team after some form of contact with Northamptonshire Police.

The Early Intervention Team then provides support at an early stage, without which problems could escalate or children could be living in a family where abusive behaviour or mental health issues are having a negative effect.

The large number of referrals to the Early Intervention Team is thought to indicate that it is filling a gap for lower level support that was not previously available and means that more families are receiving help, more quickly.

Two members of the Early Intervention Team also work with the CIRV programme – 154 of the total number of referrals so far have been young people needing support because of involvement in gang-related activity.

Keeping young people safe and intervening early with support where it is needed are at the heart of the Commissioner’s Police and Crime Plan.

Northamptonshire Police, Fire and Crime Commissioner Stephen Mold said: “It is so important that we intervene early with families and young people so that we keep them safe from, and out of, trouble and they have the best chance to fulfil their potential.

“We cannot arrest our way out of the issues that face our county and that are causing increased demand for policing services in Northamptonshire. This Team is part of our commitment to prevent young people becoming involved in crime and to tackle the root causes of crime.”

The Police, Fire and Crime Commissioner has also invested in a Youth Team to provide outreach service and support to young people in areas of the county where the need is greatest.