Home security boost in Northampton and Wellingborough this Christmas

More than 2,000 homes near to the centre of Northampton have been given home security packs full of information and items to help them keep safe and prevent crime. 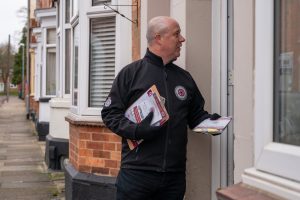 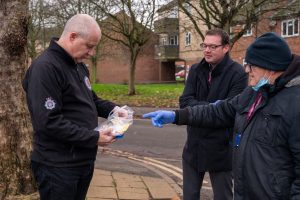 Homes in the Portland Place, Kettering Road and Bouverie estate area of Northampton have received the packs as part of a project being run by the Office of Northamptonshire Police, Fire and Crime Commissioner, Stephen Mold and funded by a £1.375 million grant from the Home Office Safer Streets Fund.

A further 520 homes in part of the area with poorer street lighting and street design will be receiving free crime prevention products such as door chains and letterbox guards, which are being supplied and fitted free of charge.

Northamptonshire Fire and Rescue Service Prevention team and Fire crews from The Mounts will also be talking to people about fire safety in their homes and offering a visit to carry out a home fire safety check in the new year.

More than 2,000 packs have already been distributed in the Victoria and Isebrook area of Wellingborough over the last few weeks, where 600 homes have also been fitted with crime prevention devices.  Work is ongoing to consult with local people and fit gates on privately owned alleys that run behind houses.

The Borough Council of Wellingborough is also supporting the project and consulting on the gating of 30 alleys in public ownership to improve security in the area. This work will continue in January.

The crime-fighting projects in Northampton, Wellingborough and Kettering will see the Police, Fire and Crime Commissioner’s Office working in:

These three areas were chosen because they have levels of acquisitive crime such as burglary and vehicle crime that are higher than average for the county.

Work on all three projects is being carried out with partners including Northamptonshire Police, Northamptonshire Fire and Rescue Service and the three local authorities and will carry on in the new year.

Stephen Mold, Northamptonshire Police, Fire and Crime Commissioner, said: “Preventing crime is vitally important and it is a privilege to have this funding and be able to spend it with residents on tangible measures that add to the security of their homes and make them feel safer.

“I want to do everything I can to make Northamptonshire a safer place and this Home Office award will mean we can make physical improvements in these three communities that I hope will have an enormous impact.”