New CCTV cameras are being installed in Kettering town centre as part of a major investment to make the town safer by the Northamptonshire Police, Fire and Crime Commissioner (PFCC) and Kettering Borough Council.

The CCTV network will be boosted by 15 new cameras which will extend and improve the existing coverage in the area thanks to £150,000 of funding from the Safer Streets project of Commissioner Stephen Mold. 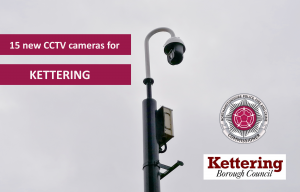 The fifteen new cameras will be installed in the All Saints area of Kettering, including six new cameras near the Pleasure Park, with more being placed at North Park, Mill Road Park, Mill Road, Knibb Street, Rockingham Road and Wood Street.

Output from the cameras will provide support to the police in investigating crime and it is hoped that the extended camera network will also deter criminal and anti-social behaviour and help the community to be, and feel safer.

The Commissioner’s office successfully bid for funding from the Home Office to carry out crime prevention projects in Kettering, Wellingborough and Northampton. Around £280,000 from the total grant of £1.4 million that the Commissioner received is being spent to make homes and the environment in Kettering more secure.

This funding package has also ensured that more than 60 homes in the All Saints area have either already received or will soon get a Ring doorbell system installed, allowing homeowners to see who is knocking at their door.

Home security packages have also been sent to 139 homes, each of which is worth £100 and includes tools to help fight against vehicle crime and bike theft.

Stephen Mold, the Police, Fire and Crime Commissioner for Northamptonshire, said: “I am delighted to have been able to fund these projects, which will really contribute to making these areas feel much safer for residents. Extending and improving the CCTV coverage of the town centre will enhance these public spaces and will assist in deterring anti-social behaviour and crime. Our Safer Streets funding has allowed us to invest in what are physical and visible improvements for residents, and it has been great to have been able to work with the borough council to make these communities safer.”

The funding from the PFCC comes after investment in recent years from Kettering Borough Council to upgrade the network, with the latest cameras delivering state-of-the-art facilities and offering the best possible images.

Councillor Lesley Thurland, deputy leader at Kettering Borough Council and a councillor for Kettering’s All Saints ward, said: “I am delighted that 15 new CCTV cameras are being installed in Kettering town centre alongside other crime prevention initiatives taking place across Kettering. This is a great example of a positive partnership between Northamptonshire Police, Fire and Crime Commissioner and the council to deter and detect criminal and anti-social behaviour and to help our residents feel safer and more secure.”

And Councillor Keli Watts, of Kettering’s William Knibb ward, added: “The installation of these new CCTV cameras is good news for the area. I am keen to ensure that we continue to work in close partnership with the Northamptonshire Police, Fire and Crime Commissioner so that we maintain a proactive stance on fighting crime and anti-social behaviour.”

Work is due to start imminently for installing the cameras, while posts have already been installed and trenches have been dug for the power cables, with the work expected to be completed in the next few weeks.

Extra CCTV cameras have also been installed in Wellingborough, while Northampton will also get additional cameras in the coming weeks thanks to the Commissioner’s Safer Streets scheme.