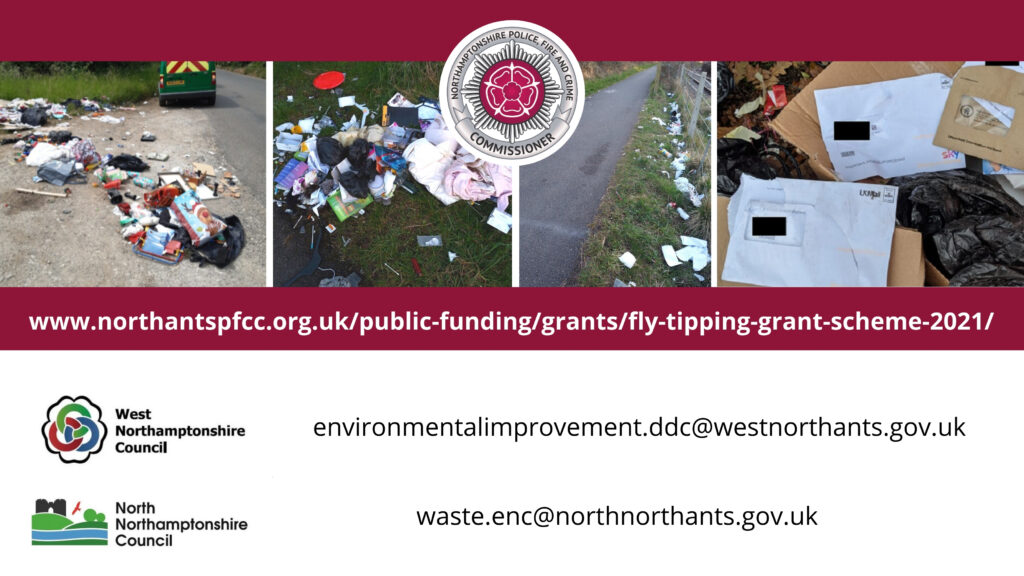 A pilot scheme to support landowners with the cost of removing fly-tipping from their land and securing it against future incidents is being rolled out across the county.

Earlier this year, Police, Fire and Crime Commissioner Stephen Mold set up a scheme to help farmers and landowners, with a view to intervening early to prevent crime and to assist in tracking down people who are fly-tipping.

Under this new scheme, farmers and private landowners can apply for a grant towards the cost of having the fly-tipped waste cleared away and to support them in putting prevention measures in place that will make the land less vulnerable to fly-tippers in the future.

Grants of up to £1,500 are available and the scheme is now open to landowners across Northamptonshire who can apply by contacting their relevant local authority.

During the pilot scheme, five people received sums ranging from £500 to the maximum £1,500 to help them tackle fly-tipping on their land. This included the proper disposal of the fly-tipped waste and the installation of gates and other measures to make the affected land less vulnerable.

He said: “I am often contacted by people who have been repeatedly targeted by organised fly-tippers. They face escalating costs of clearing their land and it also has an enormous impact on our environment and our ability to enjoy it.

“Fly-tipping is an offence and through this scheme, partner organisations are working together to tackle it, to stop it happening again and to track down the offenders.

“I want to create a safe environment in Northamptonshire, and I am pleased to be able to roll this pilot scheme out and support more people across the wider county.”

Councillor Graham Lawman, North Northamptonshire Council’s Executive member for Highways, Travel & Assets, said: “As a council, we take fly-tipping seriously and are always looking for ways to prevent and tackle it.

“Following successful pilot projects, including a new gate alongside the A6 to deter fly-tippers and removal of illegally dumped waste on farmland, I am delighted that the OPFCC are rolling this fund out to benefit the whole of North Northamptonshire. Fly-tipping is a blight on our local area, especially the wonderful countryside we have and it’s great that we will now be able to help more private landowners tackle fly-tipping on their land.

“As part of our commitment to tackling this blight, we are launching our Litter and Fly-tipping strategy for discussion at the Executive meeting next week.”

Councillor David Smith, Cabinet Member for Regulatory Services, Community Safety and Engagement at West Northamptonshire Council, said: “This funding is great news and testament to the commitment of our council and its partners in helping landowners tackle the eyesore of fly-tipping in West Northamptonshire.

“Using our beautiful area as a dumping ground is illegal, totally unacceptable behaviour and we are doing everything we can to try to stop it and track down and punish offenders.”

Anyone interested in applying for a grant to remove fly-tipping on their private land can find more details and information on how to apply at https://www.northantspfcc.org.uk/public-funding/grants/fly-tipping-grant-scheme-2021/ ‎