Stephen Mold has been elected for a second term as Northamptonshire’s Police, Fire and Crime Commissioner.

At the election count today (Monday 10 May), Stephen beat three candidates to be returned as Police, Fire and Crime Commissioner for a further three years.

Stephen thanked the public for their vote of confidence in the work he has carried out as Commissioner over the last five years and promised to consolidate and build on that work to make Northamptonshire a safer place to live.

He said there is more still to be done and pledged to work hard to secure the future for the young people of Northamptonshire.

“I’d like to thank the people who have put their trust in me and recognised just how far we have come in improving policing and fire services in Northamptonshire,” Stephen said. “We have more police officers and firefighters than for we have had for many years – we have recruited more than 200 police officers with 130 more to come and we have 32 additional firefighters.

“It’s the quality of the service we provide that really matters to people, and the way that we focus on their priorities so that police and fire services are fundamentally grounded in the communities they serve.  Almost one third of Northamptonshire Police officers have served for less than four years, and I want to see them embedded to become fully experienced officers who will make a major difference to the safety of the county.”

Stephen said that he would prioritise work to safeguard children and young people and to ensure that their lives are not blighted by crime. He added that the establishment of the two new unitary authorities for Northamptonshire offers a unique opportunity.

“This is a huge moment when we can all take a pause, refocus our efforts across the two new authorities, police and fire to intervene early to protect children and prevent them falling into or becoming a victim of crime. Tackling domestic violence is a significant part of that.  This is an investment in the future of young people that ultimately reduces demand and makes us all safer.”

Stephen added that he will further prioritise neighbourhood policing and embed the new neighbourhood model across all communities.

“I will ensure that we make the very best use of our increased resources to provide a strong, visible presence in all communities – rural and urban – across Northamptonshire. We will soon have more police than ever before.  I will be expecting to see more positive outcomes and investigations and a consistently high-quality service that prevents crime and makes people safer.”

Stephen said that he will ask the Chief Fire Officer to continue to bring forward the improvements in service and new ways of working that are already making an impact in Northamptonshire.

“Our two, vital emergency services are working more closely than ever before and already share buildings and support: I will expect them to embrace closer working on every level, to better protect people and promote safety in Northamptonshire.”

“I want to thank and pay tribute to the police officers, firefighters and staff who have worked hard to deliver and improve our vital emergency services.  It has been a privilege to work alongside them and an honour to be able to support them to do even better for the public they serve over the next three years.” 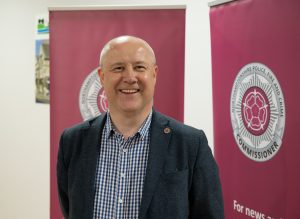