A project set up by Northamptonshire Police to help improve the lives of young people living in Northampton has been hailed a success by officers from the Early Intervention Team.

As part of the weekly sessions held in school time, the 10 to 15-year-olds sampled a number of martial arts including Thai boxing and Mixed Martial Arts (MMA), to encourage the youngsters to keep up a sporting activity. 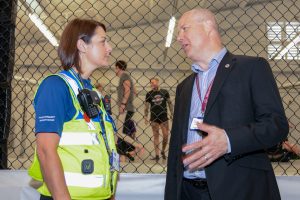 The aim of project was to give the group a better outcome in life by helping them to learn discipline and respect as well as promote fitness and a healthier lifestyle – all positive attributes they can take with them after the course.

The Early Intervention Team works alongside families and supports young people with various concerns with officers selecting the eight participants they felt would benefit most from the project.

PCSO Becky Binder-Pollard from the Early Intervention Team, said: “We wanted to run a project like this but we simply could not afford it until this funding from the Police, Fire and Crime Commissioner became available.

“The project was held in a positive environment, which helped make the young people feel very welcomed and we are confident it has made a difference to their lives.

“The project has helped to boost their confidence and self-esteem as well as taught them about discipline and personal responsibility, all skills which they can adapt to improve their lives at school and home.

“By promoting both fitness and a healthier lifestyle many of these young people’s attitude towards learning at school, attendance and self-care has increased as a result.”

This is one of the latest community safety initiatives across the county to receive support from the Northamptonshire Police, Fire and Crime Commissioner (PFCC), who awarded the project £1000. 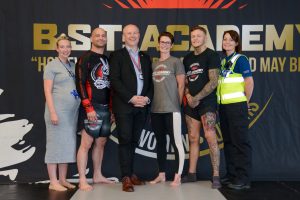 PFCC Stephen Mold said he was thrilled the project had been so well received: “Intervening early and engaging with young people who are at risk or vulnerable is an absolute priority for me and I was very supportive of this project.

“When I went along to see it in action, I was so impressed at how the young people were working with each other, and growing in self-respect, that I have asked the Early Intervention Team to work up a plan to take it more widely across Northampton, so we can work with more young people for longer and measure how effective the project is.”

At the end of their course the young people will be rewarded with a membership to BST so they can continue their journey of self-improvement which will still be supported by the Early Intervention Team.