Deputy Lord Lieutenant, Dominic Goble, was full of praise for the Northampton Guardians after joining them on the Safer Nights Out (SNO) van in Northampton earlier in the month (11th February).

Dominic, who was representing HM Lord Lieutenant of Northamptonshire, spent three hours with the volunteers as they offered practical assistance to vulnerable people on a night out in the town centre. 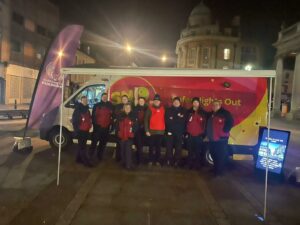 The focus of his visit was to see exactly what the volunteers dealt with on a Friday and Saturday night and to thank them for their commitment to supporting night-time revellers and ensuring that they had a safe place to go if they felt vulnerable or needed assistance.

Dominic said: “The other Friday night I took the opportunity to visit the SNOvan and walk alongside the Northampton Guardians as they delivered their own special kind of care and support. They are a dedicated and coordinated team of volunteers providing a service with much broader impact than is probably realised.”

Whilst out on patrol, Dominic saw the Guardians provide support to a lone and vulnerable woman, preventing her from stumbling into the busy road, and with the help of nearby door supervisors, arranging for her to be safely taken home. And they also reunited a confused young man with his friends, after they had been separated during the night.

Dominic remarked; “The interventions I witnessed focused on the individual’s needs and I am of the firm opinion that without the Guardians and the resources on the SNOvan the only possible outcomes for some of the people we saw would have involved police time or A&E. I offer my sincerest thanks to all involved in delivering this initiative.”

The SNOvan is available to anyone in Northampton town centre should they feel vulnerable or need assistance whilst on a night out. Staffed by volunteers from Northampton Guardians and Street Pastors, the SNOvan provides water and warmth, a phone charger, basic first aid and emotional or practical support.

“After a quick tour of the SNOvan, Dominic began his shift by heading down to one of our popular routes where he started to support members of the public alongside two of the Guardians. We were able to show him the positive impact we are having in town on a Friday and Saturday night. We are grateful for him spending a few hours with us. This was an experience we will remember and will always welcome him back again.”

The SNOvan, which was launched by the Police, Fire and Crime Commissioner in December, is in the centre of Northampton every Friday and Saturday night between 10pm and 5am.

An £800,000 grant from the Home Office has enabled the Commissioner and West Northamptonshire Council to deliver the SNOvan and, alongside partners such as the Community Safety Partnership and Northamptonshire Police, develop a wider programme of work to reduce violence against women and girls.

Further initiatives which will include additional CCTV, improved walking routes in Northampton and an awareness campaign highlighting unacceptable behaviour towards women, will be rolled out over the coming months.