A significant number of alley gates have been installed in Wellingborough and Kettering to improve security and make the areas safer for residents.

The project has taken shape thanks to investment from the Northamptonshire Police, Fire and Crime Commissioner (PFCC) Stephen Mold, after a successful bid for funding last year from the Government’s Safer Streets scheme. It has also received support from the Borough Council of Wellingborough.

In what is one of the largest projects of its kind ever seen in the country, 74 alley gates have been erected in the Victoria ward of Wellingborough. These include both public and private gates, and have secured alleyways on streets such as Colwell Road and Newcomen Road.

The PFCC has also worked with Wellingborough Norse to clear the private alleyways of almost 10 tonnes of rubbish, with £5,000 being spent on making the alleyways clean and presentable before they are gated.

The scheme has been funded through a £545,000 package for Wellingborough that has also seen the town’s CCTV system fitted with seven new cameras, and home security packages sent to more than 2,500 properties.

The Borough Council of Wellingborough has also been awarded a £50,000 sum to maintain 25 of the public alley gates for the lifespan of a Public Spaces Protection Order (PSPO) that covers the town centre, Victoria and Isebrook.  This means that for a minimum of the next three years, the area is covered by legislation that prohibits anti-social behaviour. Home owners will be given keys for the remaining 49 private gates.

Funding for all these projects was possible due to a successful bid by the PFCC last summer to the Government’s Safer Streets scheme – with Northamptonshire being awarded a total sum of £1.4 million.

Kettering has also been a beneficiary of the scheme, where 18 alley gates have also been installed as part of a £280,000 investment that, like Wellingborough, has also seen the town centre’s CCTV network increased with 15 new cameras and 150 residents being sent the home security packages – each of which is worth around £100

Statistics have indicated that where alley gates are installed, crime can be reduced by as much as 43 per cent, and it is very much making residents feel safer that is the primary aim of the projects.

Stephen Mold, Northamptonshire Police, Fire and Crime Commissioner, said: “The prevention of crime and the safety of our residents is of vital importance to us.

“These are two of three excellent schemes we are delivering in the county this financial year, using the £1.4 million of Safer Streets funding that we have secured from the Home Office.

“This is allowing us to make visible improvements in our communities and these alley gates, combined with the CCTV cameras we have also installed, will have a tangible benefit for the residents of Wellingborough and Kettering in helping to secure their homes and make them feel safer.” 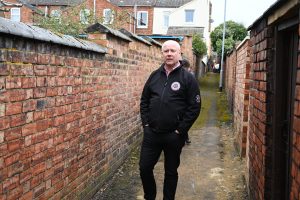