Brightkidz lead the way on the roads of Kettering

School Children in Kettering have been brightening up the streets on their safety aware journeys, thanks to a funding boost from the Northamptonshire Police, Fire and Crime Commissioner to improve road safety. 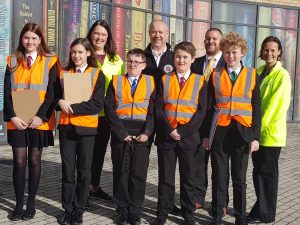 Earlier in the year, Brightkidz received funding to run Brightwayz ST:EPS; a project that is enabling three Kettering secondary schools to promote road safety and active travel. The grant awarded came from the Northamptonshire Safer Communities Fund, which was created by the PFCC to support voluntary and community groups, charities and other voluntary organisations with projects that support the aims of his Police and Crime Plan.

Brightkidz have been working with pupils at Kettering Buccleuch Academy (KBA), Southfield School and Isebrook SEN Cognition and Learning College to develop an action plan and form a student active travel working party, such as the ‘Green Team’ at KBA.

Police, Fire and Crime Commissioner Stephen Mold visited KBA today (Friday 18th October) to learn about the work of the project so far, and how it is benefiting their local community. He met with pupils who were demonstrating how they previously carried out a traffic audit outside of the school during a peak time.

Stephen Mold said: “It was great to see so many pupils actively engaging in the project. Keeping road users safe isn’t the responsibility of Northamptonshire Police alone and I am pleased to support schemes that are working alongside the police to help promote road safety.

“One of the most pleasant parts of my job is being able to provide support and funding to some great causes.  Since I became Commissioner, I have had the honour of being able to support 25 really fantastic projects across Northamptonshire with almost £200,000 of funding.”

Alison Holland, Projects and Partnerships Director at Brightkidz, said: “We were thrilled to receive this funding for our new ‘Brightwayz ST:EPS’ project to extend this to secondary schools which will enable pupils to travel in much healthier, safer and more environmentally-friendly ways.

“The activities each school does for the project depend on the school’s needs and interests. All the schools taking part will be supported by Brightkidz who are holding a range of workshops within the schools – for example learning about the importance of not being distracted when driving, walking or cycling. Other activities such as cycle marking and security guidance will be done in partnership with organisations such as the police.

“As well as increasing pupils’ awareness of issues that make our roads safer and encouraging them to choose more sustainable ways of travelling, the project will help the schools gain recognition for their achievements as they are all working towards the DfT-backed STARS national school travel accreditation award.”

“Two pupils recently played a part in local democracy when they wrote letters to Cllr Russell Roberts, Leader of Kettering Borough Council in support of the Council’s recent motion to promote walking and cycling in the Borough.”

Applications for the next round of funding opens on 21October and will close on 29 November. More details are available at www.northantspcc.org.uk/community-grants